I started this thinking my memories were pretty clear, the trip still firmly lodged somewhere in my brain. The more I've thought about it, the less I remember the day-to-day details of the actual trip. What I remember are instances, vignettes if you will; the rock tossed by a truck going by taking out the wing window on my side of the Land Cruiser, reaching over to turn the steering wheel when Russ was driving as we left the road headed towards the boggy tundra. Russ walking along a stream swollen by rain ahead of me, then disappearing into a hole, surfacing several yards downstream.

So, I'll describe as best I can, and hope for the best.

After we left Dawson City (vs. Dawson, later visited) we went north, going through Watson Lake, then following the highway as it wandered east, into the Yukon Territory. The road dips back down into BC once or twice before going north again. We camped at Muncho Lake, a glacier-fed long body of water, a greenish blue color. 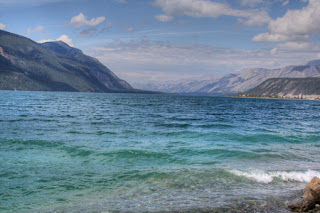 The remarkable thing that happened here was that Tim took a bath. He put on bathing trunks, waded in to his waist, soaped up and dunked his body, emerging around the same color of the lake. After feeling the water, I decided that I didn't smell that bad after all.

Continuing along, we eventually got to Whitehorse, at which point we examined the map and decided to take the long way into Alaska, and went north towards Dawson. Someone had told us about a lake along the way that had good fishing not far off the highway. Remember, when I say 'highway', I mean a wide dirt/gravel road. Just outside Whitehorse, we stopped overlooking Lake LeBarge, of Robert Service fame. As a boy, I had been fascinated by tales of the north, reading Service and the stories of Jack London. We stopped, looking over the lake and I recited from memory the first couple stanza's of "The Cremation of Sam McGee". 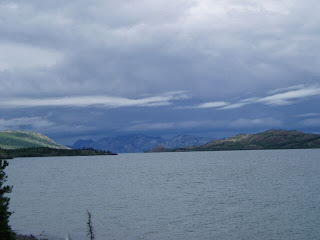 A couple hours further north, we turned east on a four-wheel-drive dirt road, going 10 or so miles to a large, long lake. Ethel Lake had some primitive campground areas, the one we camped at had a large Whitehorse family there canning lake trout, presumably for the winter's fare. They had a large canvas cooking tent where the womenfolk were tending the canning while the men went out and trolled for lake trout, coming back and tossing them out like cord wood onto the beach. I remember a youngish girl fishing from shore, hooking a fish and landing it, then exclaiming "Oh, father. It's just a jackfish..."

We stayed a day and two nights, Tim caught some fish for dinner, and we hiked around a bit, seeing a few moose.
Ethel Lake: 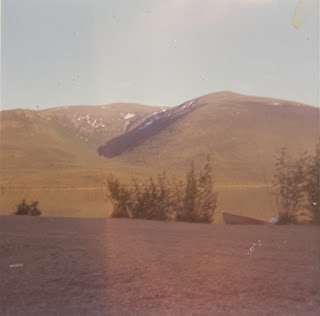 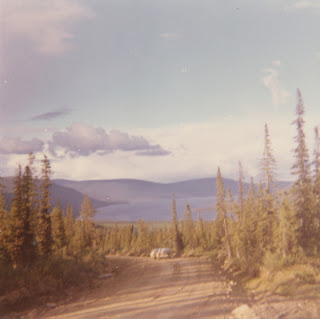 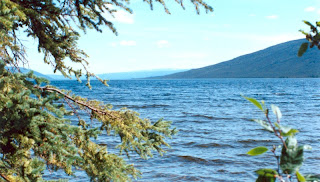 We continued on north to Dawson, made famous by the gold rush and the novels and poems of Service and London. While there, someone told us about a road the Canadian government was building that eventually would go all the way from near Dawson up to the Arctic Ocean. It went about half-way at that time, there were no settlements or services along the way, and one had to carry enough gas to get up there and back. We filled the tank, topped off the two spare 5-gallon tanks, and started off on the Dempster Highway.

The gravel/dirt road started near Dawson, where the Klondike River enters the Yukon River. Apparently now there is a large sign, and the road while still dirt, has markers, mile post and curve signs. Then it was totally unmarked, except for the odd handmade sign naming the rivers crossed. In the three days were were on it, we encountered fewer than 5 other vehicles. 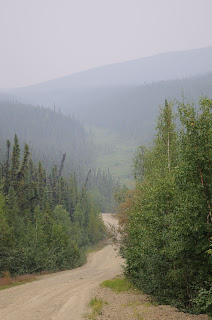 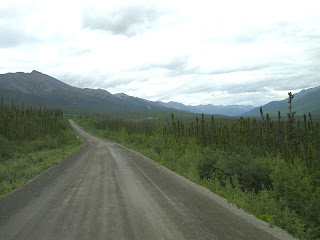 The road followed the Klondike River north, the first several miles of the valley were still scarred by the placer mining that had taken place in the late 19th century, with old machinery still visible on the river bed.
Around 50 miles north, we were in the Blackstone River valley, with the Oglivie Mountain Range around it. 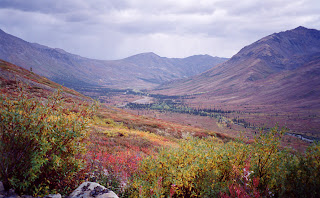 We camped just off the road near the small river, and grabbed our rods. We carried a shotgun, and along the river saw some grizzly tracks in the sand. The fishing was remarkable....the river was classic riffle and pool structure, and in every pool the first several casts would yield 15 to 20 inch grayling. Beautiful fish with large sail-like dorsal fins. We kept one or two for dinner, not realizing just how bony they would be.

The next morning we continued on, going up over an unmarked pass out into the treeless tundra. 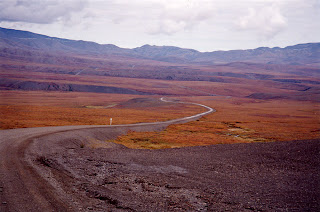 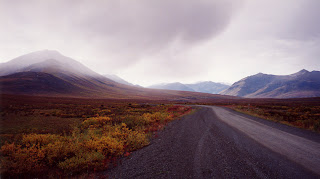 After a day we got to a newer looking bridge, crossing a larger river, with a sign telling us it was the Peel River. We camped there for the night, and saw some ducks in a large pond. I suggested to Tim that he go get us some duck for dinner, thinking he'd jump-shoot a couple. The young man walked to the pond's edge, and promptly ground-sluiced the flock, leaving 4 ducks floating out of reach. He spent the next hour with his spinning rod, fishing them out. 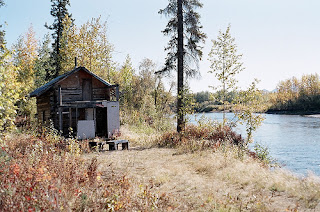 This old cabin was probably a trapper's wintertime abode, and still had some emergency canned goods and matches in a cupboard.

The next morning I put the two spare cans of gas into the Land Cruiser's tank, and we started back south. It felt to me that I had now done what I'd wanted to do since I was 7.......be in and experience the country that London and Service had written so well about, stirring my imagination and wanderlust.

Two summer's later I would be back on this road, and go further, up past the arctic circle. But for now it was on to Alaska.

to be continued.
Posted by Should Fish More at 9:15 AM 7 comments:

In August of 1973 I was living in Grants Pass, Oregon. My wife Cary was pregnant with our first daughter, and was going to Europe with her mother for two weeks. We were thinking of moving to Alaska, well...I was thinking of moving to Alaska, and thought that this would be a good time for a exploratory trip.  I also thought it would be fun to take my two nephews along. Russ and Tim, 16 and 13 respectively, were great kids, and over the years had often gone fishing and hunting with me. They lived with my sister Cora and brother-in-law Stew in Bend. I bought a Milepost, the great annual magazine about the Alaska Highway, researched as best as one could in that pre-google era, and made our 1971 Toyota Land Cruiser ready for the trip. A roof rack, a second spare tire, and two five gallon gas cans on the back. 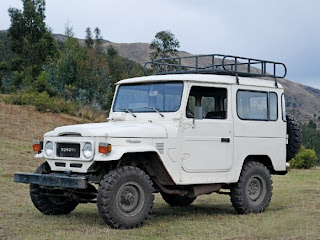 A couple days after Cary left for the mother-daughter vacation, I left Grass Pants (the nickname of Grants Pass, origin unknown), drove to Bend early in the morning, gathered up the nephews and headed north on Highway 97. The plan was to camp at night, drive all day, and decided where we'd go as we got there.

We crossed into BC the first day, entering the Okanagan Valley, and camped that first night somewhere north of Kamloops. That evening we drove to a small store nearby, and the proprietor informed us that our President had resigned. I bought a six-pack in celebration of Nixon's exit, and some cider for the boys. Around the fire that evening, it took me a bit to realize that the kids were getting a bit garrulous and silly. On closer inspection of the apple cider I determined it was hard cider. They were disappointed to hear that the can they had in their grimy paws was the last one they would get.

We spent the next day driving north, stopping north of Prince George, BC. The scenery reminded everyone of the area north of Bend, pine, rimrock, some sagebrush. 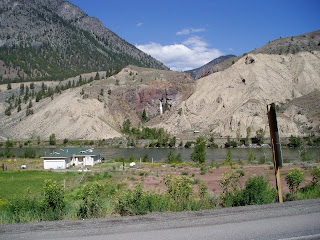 The boys proved to be good travelling companions, the Land Cruiser was not the fastest of vehicles, and 60 mph was about as fast as it wanted to go. Stiff suspension made for a bumpy ride, and the one who sat in the back on one of the two sideways-facing bench seat was both crowded by our gear, and had a sore butt and head (from hitting the roof on bumps).

We got to Dawson Creek on the third day of the trip, as I remember. The small town was the 'official' start of  the Alaska Highway. 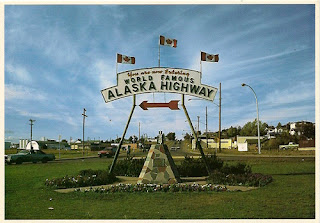 The Alaska Highway in 1973 was 1,500 miles of dirt and gravel road. The copy of the Milepost was invaluable, it described the road in detail, and was surprisingly accurate. It warned us of a huge pothole at the start of the road, and indeed there it was. From this point, our speed dropped to around 40 mph, both because of road conditions, but the flying gravel from passing trucks and cars. It was an adventure, and vehicles were either well-equipped, or sitting at the side of the road. 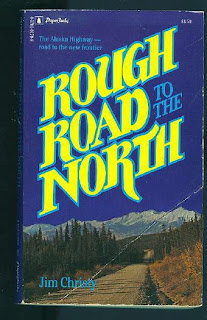 The cover of an old book, the road looked exactly like this. 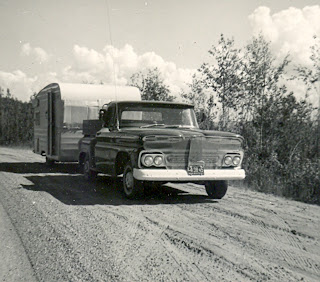 Note the screen added on the front of this pickup, keeping rocks from breaking the headlights and puncturing the radiator. 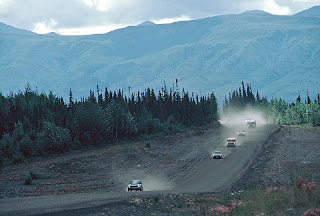 A newer picture, but what the road was like then, for 1500 miles.

In the following days we went through northern BC, into the Yukon Territory, and on into Alaska. Russ drove occasionally, ran off the road, then while walking slipped into a flooding stream and disappeared for several seconds. Tim on a mission to get dinner, ground-sluiced a flock of ducks, and was responsible for a border inspector getting a fishing hook in his hand.