Fickle, fickle spring. A little over a week ago, it hit 72f in my little post-industrial town in SW Montana. Now... 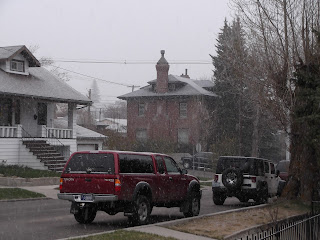 Fall before last, my youngest daughter Emily planted bulbs along the iron fence in front. Last spring, the crocus came up in late May. A week ago, they were up, nearly a month early, perhaps encouraged into thinking spring was here. 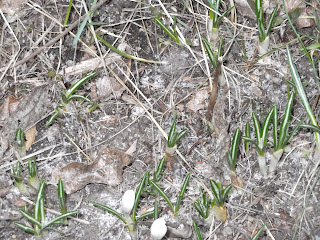 Not the best picture, but you can make out the white blossoms, wondering what was going on.

I've been out fishing, over a week ago at the start of the warm, beguiling, and ultimately false weather. The Big Hole was at around 1400 cfs when a friend and I arrived, three hours later it had rose a foot and colored up. We then went up one of the tributaries that flow in from the south, and fished. The brookies rose readily to a #16 royal wulff, and I saw pairs of rainbows on the gravel redds. I didn't cast over the rainbows, though they might have rose. Not through any real moral reason, rather that I don't think I would have appreciated someone tossing hooks through my bedroom river at a moment when I might have gotten lucky.

So, after looking at the beleaguered flowers this morning, I came back inside and took the vase of Iris from the fireplace mantle and placed it on the sill, as a shield perhaps against the reminder the winter ain't quite done with us. 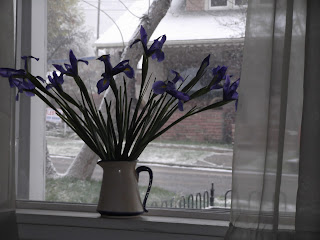 In a few minutes I'll head out to the BS cafe for breakfast, grouse to Sandy and the other pensioners like me who gather in the morning to tell the same stories countless times, compare new aches, and talk about the May Day disturbances in Seattle.

These kids today, with their clothes, hair and music. Somewhere my dad is walking a river with the teenage me, listening to me pontificate on how we're a different generation, we'll be accepting of people different than us. He'll look sideways at me, rub his chin in that way he had and hide his grin with his hand.

Fair warning, this is going to be a bit of a polemic rant. And biased, politically. If jabs at right-wingnuts and the conservative christian right bother you, run away. Above is a 'next blog' icon. Click it. Three or four blogs on, you'll find one that starts "I live my life for Jesus, etc". You'll like that better.

So, my host here gets the NY Times, and Sundays the NY edition and the LA one. She's off for the weekend, so I brought them in, and with some trepidation, opened them up and read. Two cups of coffee didn't help. Let me say that when I do read newspapers, I like the Times better than most.  Fine writing, and I love the sports section; erudite sports writing is something of a rarity. Despite myself, I was drawn to articles about the GOP primary. I knew it was a mistake, but I read on. Later, perhaps feeling I hadn't been punished enough, I read the reviews of two books, one titled "Pity The Billionaire, and another "Rule and Ruin". Then I brooded. Next thing to sulking, actually. I never thought I'd be nostalgic for the days of Ronald Reagan or Tricky Dick. At least Reagan would sit down for a drink with Tip O'Neill. Now, the political nuts from the right can scarcely be seen in the same room with a democrat, let alone talk and come to any compromise with them. And I don't feel any kinder towards the democrats. If they're not paddling their leaking boats to starboard as fast as they can, they're cowering and chanting "Please don't hurt me."

How has it come to this? Do we actually want the moral black hole that is Rick Santorum, or the racism that is Newt Gingrich? Isn't the "Oh, did I say something rational? Let me take that back." that is Mitt Romney bad enough? Isn't it enough that we got a President that has driven to the middle of the road, and drifted wherever the political tides have flowed? I know, I know, nothing is possible in politics today that involves any real change that isn't fueled by swearing on the bible, but hell....when did mediocrity become an attribute, and intellectual prowess a liability?? It was bad enough that Mr. Cain choose that ninny from Alaska as a running mate, and she actually developed a following based on the premise that she's just dumb as a rock, and then the other woman to enter the arena, Ms. Bachmann didn't have the historical knowledge of a 3rd grader, but now these other bottom-feeders are actually pretending they should be president. President Santorum?? It's too horrid and nauseating to imagine. President Gingrich?? I'd rather have Taft back.

On to the book reviews, which didn't help my need for Prilosec. I'm not going to rely on the reviews, however. The local library will do, even if I have to wait. But the reviews, while missing perhaps the nuance of the complete book, were enough to irritate. The tea party (I want to reduce government, except that which benefits me...), the GOP mainstream (the objective: money. Tax cuts for the rich, their constituency.  The rest, a sop for the masses, a way to entrap the masses, eg. abortion, gay marriage, etc).

So, wish I had a solution. Even more, I wish a solution was possible in which our country comes out a winner. I just don't see it. We've become a culture in which every problem has to have a simple solution that doesn't hurt us. It can't be complex, it can't require compromise, or even deep thought. It's visceral, if it isn't, it does not resonate. Taxes are bad, don't ask me how our roads, schools, water lines, electricity will be maintained or improved, they just will. It's magic, it's gotta be. It'll just happen. Who cares about schools? My kids are grown/I don't have any. I don't care about the poor, I've got mine. And so it goes.

So what is to be done? I suppose the usual stuff: vote, nationally and locally. Pay attention to local issues, the school board, the city council. Be vocal. Write those in power. Live your life like you'd like others to live. Be kind to those deserving. Mock the loonies. Ask questions. Question authority.

I worked on RFK's campaign, and since several others. I've paid more taxes than most people, and don't regret any of it. You guys gotta cowboy up.
Posted by Should Fish More at 5:13 PM 6 comments:

I'm back. Well, not back as in home in  Montana, but back on this blog. I figure the Road Trip is over, though miles remain at some point when I do go home, but the actual trip is over. 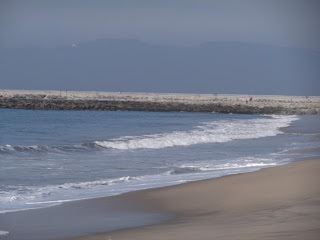 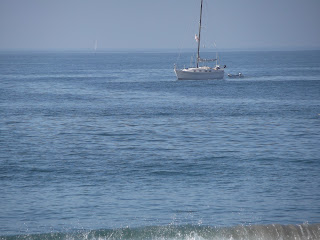 These were taken yesterday on a beach 5 minutes away, on a day equally beautiful.

Last night the dinner was duck, brined, smoked then baked. Wild rice, cooked by soaking in first water, then bringing to a boil, letting soak, then bringing to a boil in poultry broth, and soaking again. Fresh bread, and some excellent Italian vegetable dishes. This was supplemented by L. making mimosa's, fresh oranges of course. 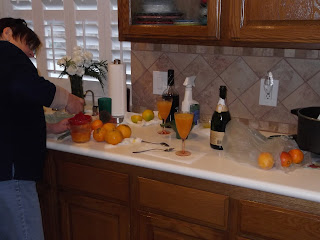 Today, a day of rest, will feature a walk on Redondo Beach, and calamari for dinner. And leftover dessert from last night: a zuppa inglese.

Hope all and sundry are having an equally good day, and I wish all of you the best new year possible.
Cheers
Posted by Should Fish More at 10:42 AM 3 comments: