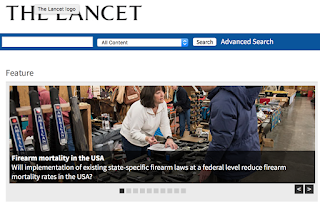 The media, blogs and the world at large never tires of telling us that gun restrictions passed by legislation are either not possible or won't work. Or both. It's become an article of faith with them and the NRA, such that it does not need sources or really any validation, just repeating the dictum to anyone who mentions that gun deaths in the US are far out of line with the civilized world.

A study in Lancet, an academic, medical journal refutes this view with one of the few actual peer-reviewed study done by credentialed researchers at respected institutions. "Firearms Legislation and Firearm Mortality in the USA: A Cross-sectional, State-level Study,"

Researchers from Columbia University, Boston University and The University of Bern collaborated in writing the peer reviewed article, that while agreeing that some of the restrictions that have been suggested would have little effect, three in particular could dramatically reduce the number of gun deaths in the US. To the tune of a reduction from the current 10:100,000 to 0.16 per 100,000.

The three are:
1.  Laws requiring firearm identification through ballistic imprinting or microstamping.

So now the NRA will have to switch from 'it won't make any difference' to 'we don't want them because our masters, gun manufacturers, will have less profit'.

Seriously though, it's a different ballgame when the argument is 'we can't pass them' vs 'they won't work'. One requires a change in the public perception and attitude, one we already see happening here in the US. Millennials,  the new majority group, have a significantly higher approval of gun laws than my boomers.  Look at the gay marriage issue as an example of how viewpoints can change, sometimes dramatically, in a short period.
Posted by Should Fish More at 10:10 AM 17 comments:

There are few writers that I've enjoyed and learned from more than Jim Harrison. Probably best known for the film "Legends of the Fall", a movie taken from a novella, his best works rarely achieved a wide audience. "Dalva" is an excellent novel, and perhaps the best writing I've read where the author writes in a voice of the opposite sex.

His book about food, "The Raw and the Cooked..." details his love affair with food and drink that includes meals taken with Orson Welles and other notables, and makes one wonder what it is  like to sit down in front of a kilo of beluga caviar and a fifth of vodka with Jack Nicholson. 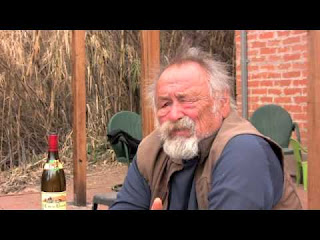 If you haven't read his works, it's not too late.

A Belgian film and theater director named Ismaël Saidi has written a succinct, heartfelt response to a troubling question that Muslims often hear after an Islamist terrorist attack: “Why aren’t Muslims condemning the terrorist attacks en masse?” Saidi, who was born in Belgium to Moroccan parents, published his riposte on Facebook, where it was liked more than 15,000 times, and the Belgian newspaper La Libre has reprinted it. Saidi gave Slate permission to publish the post as well. My rough translation, which is hopefully a little more idiomatic than Facebook’s automatic translation, is below.

“Why aren’t Muslims taking to the streets en masse to condemn the attacks?”

Because we’re caring for the wounded in hospitals …

Because we’re driving the buses, the trams, and the subway cars so that life can continue, though wounded …

Because we’re still looking for criminals in our police, investigator, and magistrate outfits …

Because we’re crying for our dead, too …

Because we are no more spared than anyone else …

Because we are doubly, triply bruised …

Because the same faith produced the executioner and the victim …

Because we’re groggy, lost, and we’re trying to understand …

Because we’re counting our dead …

Because we’re in mourning …

The rest is only silence …

A couple Sundays ago, I tried to log in to my account, could not, then found all my posts for the last several years were gone. Finito, apparently, or so Google says.

I'm not sure if I'll continue here, not clear what the point is unless it's because I want to, and that's still up in the air.

Anyway, it's been coolish here, two mornings ago at 8am it was zero on the back porch. Kept the St. Paddy's day celebrants inside at least.

I'm still working on recovering the hundred or more posts, I'm told there is some hope, so we'll see.
Posted by Should Fish More at 6:41 PM 26 comments:

Trump, Nativist and Populist Parties in US, or Cuban Black Beans and Pork 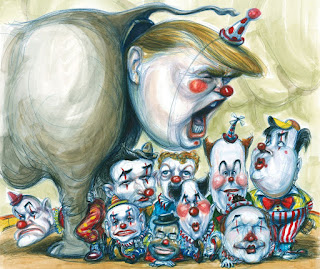 With Romney's speech, and McCain's follow-up, the politics of the US have entered the weird zone, as far as Presidential campaign's are concerned. It makes me think of the various nativist and populist parties that have taken up oxygen over the decades and centuries. The 'Know Nothing' party, 'American Party', the various books, Grant's The Passing of the Great Race, and well thought of writers, like George Kennan ("X"), the originator of the domino theory about communism says

"the very culture of the bulk of the population of these regions will tend to be primarily Latin-American in nature rather than what is inherited from earlier American traditions ... Could it really be that there was so little of merit [in America] that it deserves to be recklessly trashed in favor of a polyglot mix-mash?"[27] Meyers argues that Kennan represented the "tradition of militant nativism" that resembled or even exceeded the Know Nothings of the 1850s.[28] Mayers adds that Kennan also believed American women had too much power."

Kennan turns out to be just another apologist for our racist, misogynist times.

So we see it's not an issue or argument unique to our times, one we're just the current players in the drama. Trump is just another player, a minor one so far, in a continuing conversation we Americans have been having for hundreds of years.

Which way will it go now, forward, or back to some iteration of what we've already tried and failed with?

So, instead of my no doubt incorrect predictions of what the GOP will do in the days ahead, I'll talk about my dinner tonight:

I slow baked a pork shoulder last night, so today I decided on a Cuban version of this, hoping for a invite from the President to accompany him to Cuba later this year. I took a bit of that, and...,
chopped onions
chopped green peppers
squashed garlic
diced hatch chili
chicken broth
basmati rice

Combined them with the pork, after sauteing the onions, green peppers and garlic, adding the other stuff, then 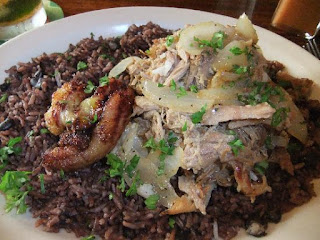