Found by my daughter on the Walmart facebook.....I assume it's in response to big W's phasing out the flag from their inventory.

Gotta be one of the best responses ever. Do click on it so you can read the response. 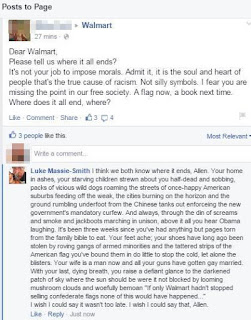 The Roman/Britain Interregnum lasted 100 years, mine....not that long.
Posted by Should Fish More at 2:14 PM 12 comments: 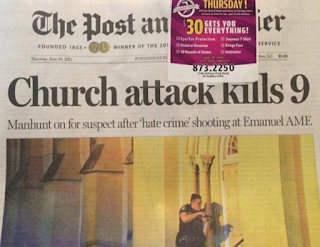 If you haven't seen this today, it's not a fake. The Charleston paper put a gun store ad on the front page, right with the headline. And in the sub-headline, note that hate crime is italicized.

I'm not a big fan of comments in the online newspapers. The anonymity provided seems to make some people give free reign to the dark reaches of their souls. The only newspaper where this seems to be less the case is the NY Times.

We've all read about the massacre in Charleston. People familiar with my blog can guess my reaction. I read two comments in the Times that are among the best I've read about horrific events like this. I reprint them in full, with the writer's screen names omitted.

" I am Irish. For many years in my native land the Rev. Ian Paisley spouted bigoted hatred about Catholics in Northern Ireland, but then claimed innocence when some militant sectarian group massacred Catholics. Speech was not murder, he said. He would never condone killing, he said. Then he went right back to feeding the attitudes that spawned the killing. Few were fooled.
We should not be fooled in America today.
In this country the "mainstream" right-wing has made an industry of demonizing African-Americans as "thugs" and criminals - just look at the divergence in tone between the recent coverage of Ferguson or Baltimore and the (mostly white) biker massacre in Waco, TX. For decades, white America has been told that black Americans are lazy leeches, dependent on hand-outs funded by your hard-earned taxes to bankroll their immoral lifestyles.
The first black president was greeted by the right not only with diehard obstructionism but a chorus of color-coded abuse ("lazy," "food-stamp president" etc) and questions about his very American-ness: he was "not one of us," a foreigner adhering to a foreign religion who has no right to be president.
The siren song of racial hate relentlessly put out by the "mainstream" right finds echo in the gunshots that rang out in Charleston.
Rightists will, of course, deny the connection, the way Paisley did. But we are not fooled."

And another, regarding the seemingly inevitable opinion from the NRA and their gun nut adherents about how this could have been prevented:

"If only EVERYONE else had been armed then the whole church could have been a battlefield. What will it take to get through to the American people to make them realize what they have become?"
Posted by Should Fish More at 11:37 AM 17 comments: