Hash browns, Vegetarians, and It's Not My Fault

In graduate school I had a couple cooking-related jobs, one was at a child development center of the university. It all happened by chance, meeting the director happenstance, and her offering me the job.

It was easy stuff, provide breakfast, snacks and lunch for around 20 kids age 5-7. It took me maximum 3 hours a day.  What I gave them varied between tossing boxes of cereal and bowls on a table, putting some fruit in a bowl, etc. Other days I put real effort into it, it was usually 2 days of slacker meals, sandwiches at lunch, etc...the other three days it was a bit more, simmered stew from scratch for lunch, french toast for breakfast. One frequent breakfast was hashbrowns, scrambled eggs, milk and fruit. I did the potatoes from scratch, grated, added chopped onions, green peppers, red bell peppers, and my secret ingredient.....a pound of finely-chopped pork sausage. It called for 25+ potatoes, so it was good sized, at least 5 parents dropping off their kids would stay for breakfast. The sausage was in tiny bits, hardly noticeable. 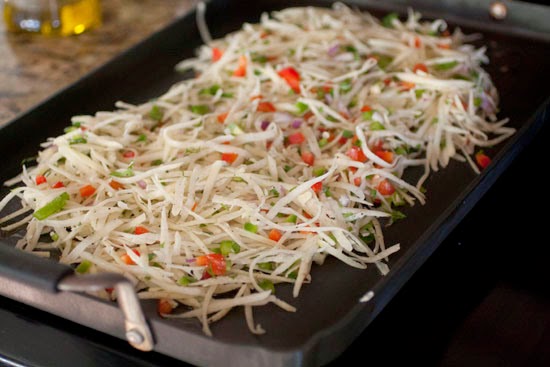 Which gets us to the point of this post:

One couple had an extremely interesting boy, around 5. They could be described as eco-hippy-activists...nice people, I liked them. The dad was in a history class I taught.  We often talked when they were there. Dylan, the boy, wore suits (seriously) to school often, with a tie. He carried a briefcase. He would lead his parents around, introducing them formally...."This is my mom, this is my dad." If he kept it up, these last 30+ years he's in the tea party now. I doubt that happened, the kid seemed much too smart.

One morning towards the end of my year there, they came over, eating from a plate....my hashbrowns and eggs. The dad, around my age, said something to the effect of "Your hashbrowns are the best we've ever had, they are great!" I thanked them. "What makes them so good, so special?" the wife asked in her flowered skirt. "I think it's the pork sausage." I said.

They both looked at their plates, at each other, then at me. I thought they were getting pale. "But, but-we're vegetarians!" one exclaimed. They had been eating it occasionally for a year.  "Huh." was my only response.

Heading to Seattle for a couple weeks, see you down the creek.
Posted by Should Fish More at 4:16 PM 15 comments:

How on earth did I go from this: 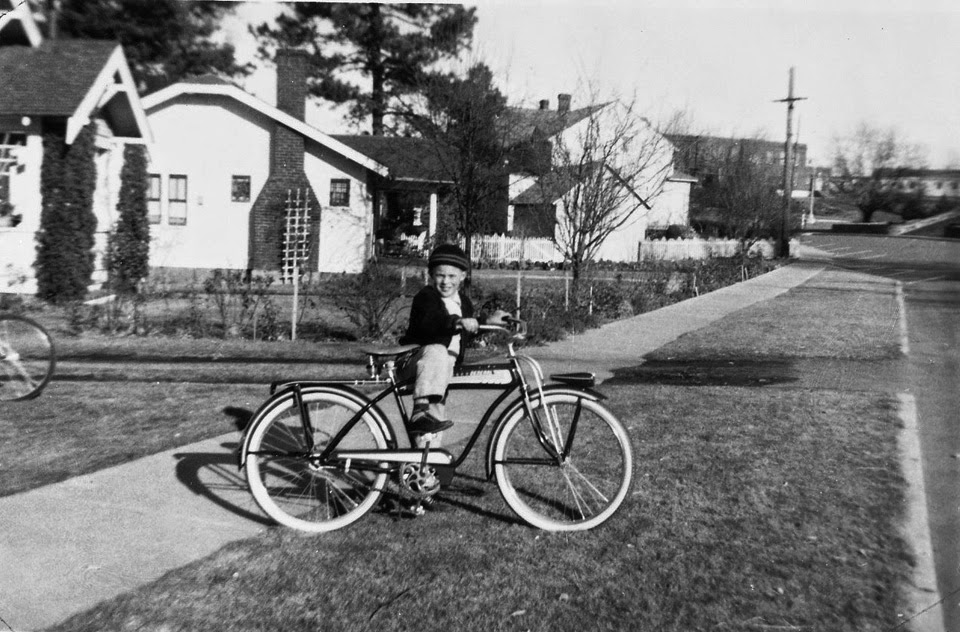 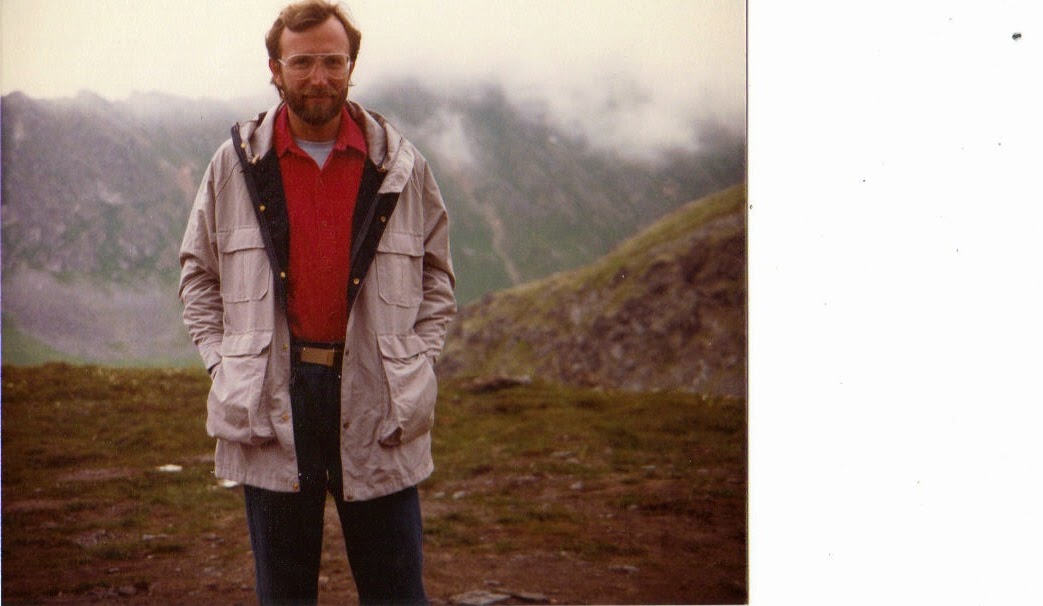 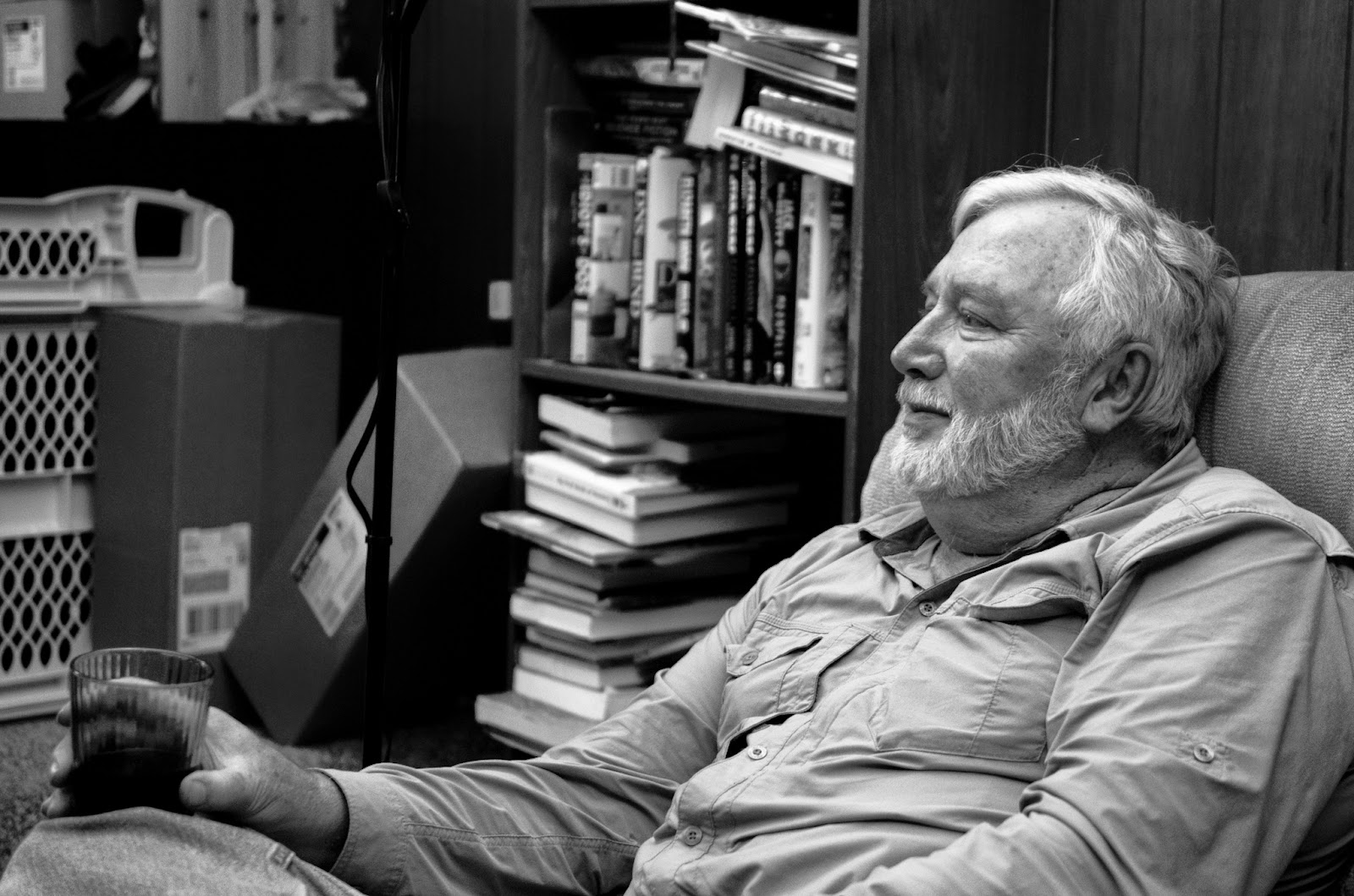 11 years ago I spent a lot of time in Longmont, Colorado. The company I was consulting for wanted me there every week, so I rented a house in a nice neighborhood. Frankly, I hated the place, the area in general. People there were unjustly proud that one could see the front range of the Rockies off in the distance. It was flat, crowded and in the summer miserably hot. My home in Montana is a thousand feet higher, right in the middle of the mountains, and a hot day is 85, cooling to 50 at night.

I flew home often, just to escape. Maintaining two residences made the gig almost not worth it.

Anyway, one evening in the summer I was there. It was hot, over 90f at 10pm. The house had a swamp cooler in the living room that did little to mitigate the heat. A family trait is that neither I nor my kids can tolerate heat, anything over 75 is uncomfortable.

I am getting to the point of this, albeit slowly.

This particular evening I took a cold shower, a couple times. It worked for several minutes afterward, especially if I didn't towel off afterwards, evaporation and all that.

The house had hardwood floors.

As I walked, barefoot from the bathroom down the hall I turned a corner, my feet slipped, down I went,  hearing a loud 'pop' as I fell. I lay a moment, I knew I had done something, but tried to get up. When I put weight on my left foot down I went again. I looked down, seeing a shard of bone sticking out of the skin. I clearly remember thinking "bummer"....

Did I mention I was unclothed?

I crawled on the floor to the table in the living room where my phone was and dialed 911. I told them the situation, they said they were sending someone immediately. As I lay there, in retrospect going into shock, I called 911 again. The woman explained someone was on the way. I said "Listen, there's another thing. I'm naked." A short silence ensued. "Oh?" she said. "Yes, I had just got out of the shower." I explained. "Uh huh, ok." she said.

I managed to reach a navajo blanket on the sofa and pulled it over me. A few minutes later I saw flashing light reflected on the ceiling, and somehow they got in the locked door in seconds. Two women paramedics entered, followed by two male firemen. I apologized to the paramedics for my unclothed state. As they examined my ankle one said "Sir, we've seen everything. This is nothing special."

Quickly they had me on a gurney and out the door. Outside there was the ambulance and two fire trucks, and several people milling about. They had an IV in me and fluid going within a minute, and off we went to the hospital.

Turns out in addition to the compound fracture I had completely torn and separated all the ligaments in my ankle. The surgery took 8 hours. 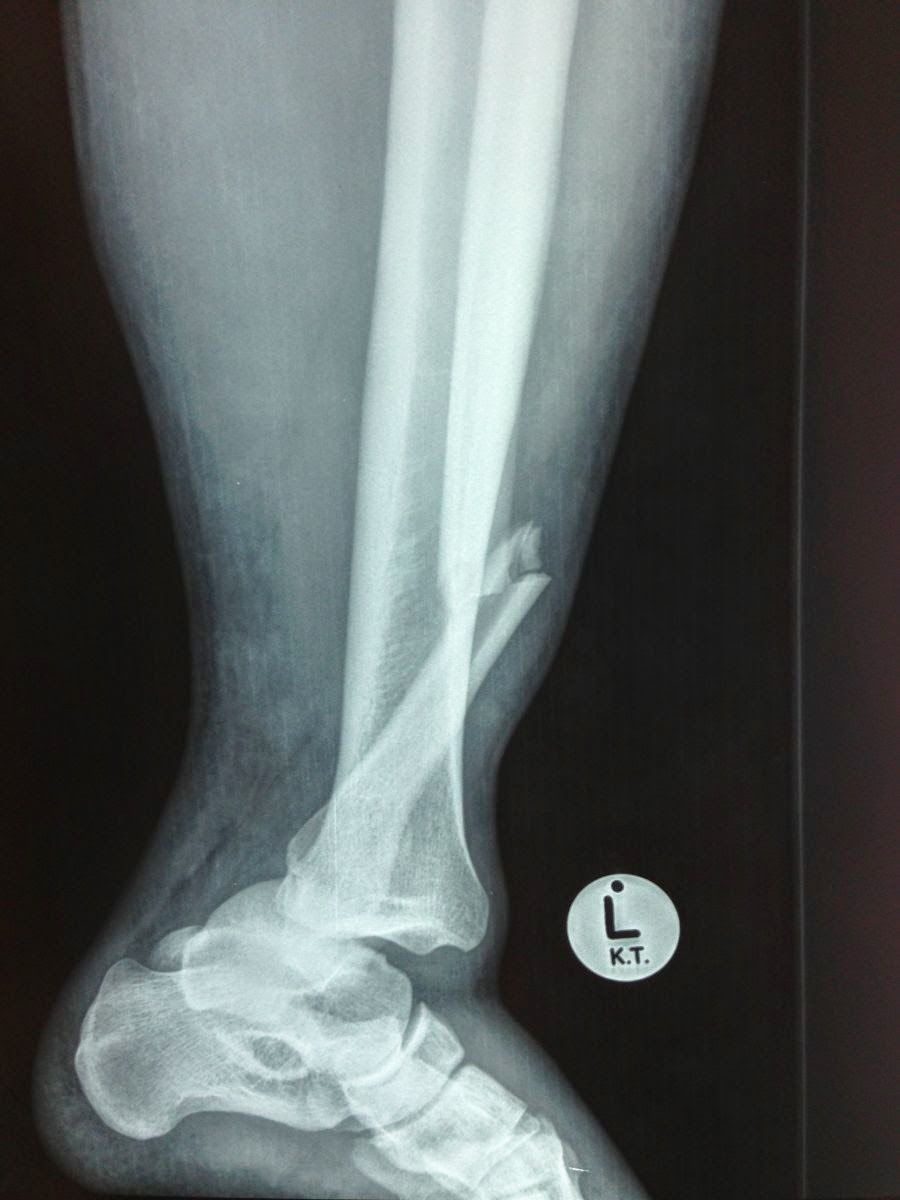 The Fibula repair was the easiest part of the surgery; a stabilizing plate and and half dozen screws were put in. The ortho cutter said the ligament repair was one of the hardest procedures he'd ever done. 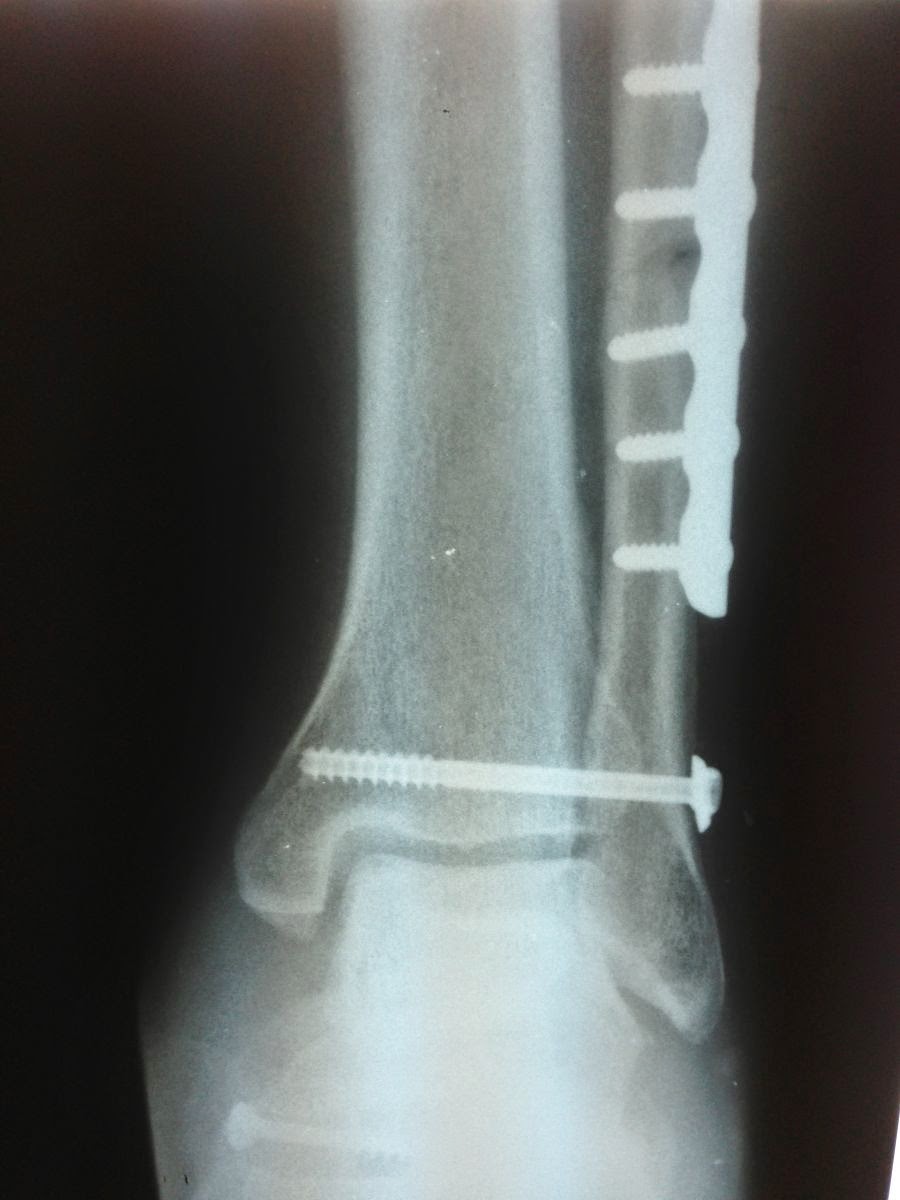 It was nearly 6 months before I got rid of the crutches. A decade later my walking is limited to a mile at the most. I can still wade in a river and fish, so there's that.

I took a 4 day trip awhile back to one of the more remote areas of Montana. I'd heard of Centennial Valley, but not many people I talked to had ever been there. It was recently in the news regarding a hunter going after spring black bears being attacked by a grizzly.

The trip starts by getting on a freeway going south towards Idaho. 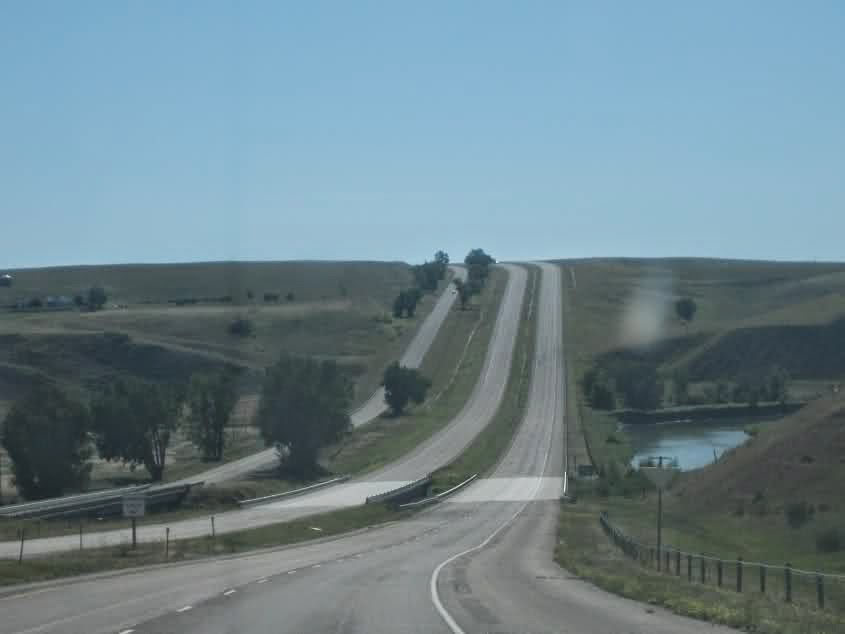 Even in the summer, peak tourist season up here, it's probable that you might go a couple minutes without seeing another vehicle. After 2 hours driving you get off the freeway and in less than a minute you're on this road. 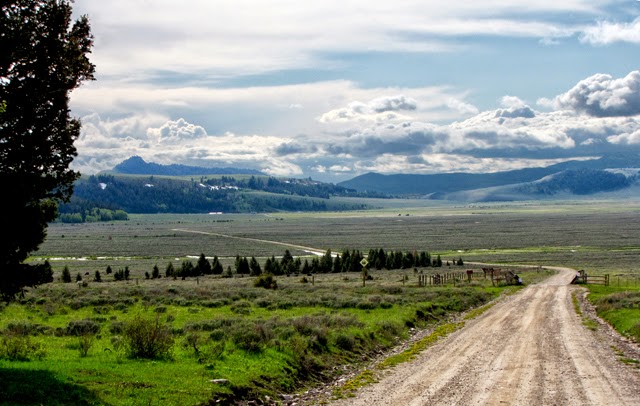 It's potholed, bumpy, and if it rains, you need a four-wheel drive. Otherwise this might happen: The road goes around 80 miles, up the valley for nearly 50 miles, then up over a mountain pass and down into Henry's Lake, Idaho. There is a Forest Service station about 20 miles in, and the base for Red Rocks Wildlife Refuge. 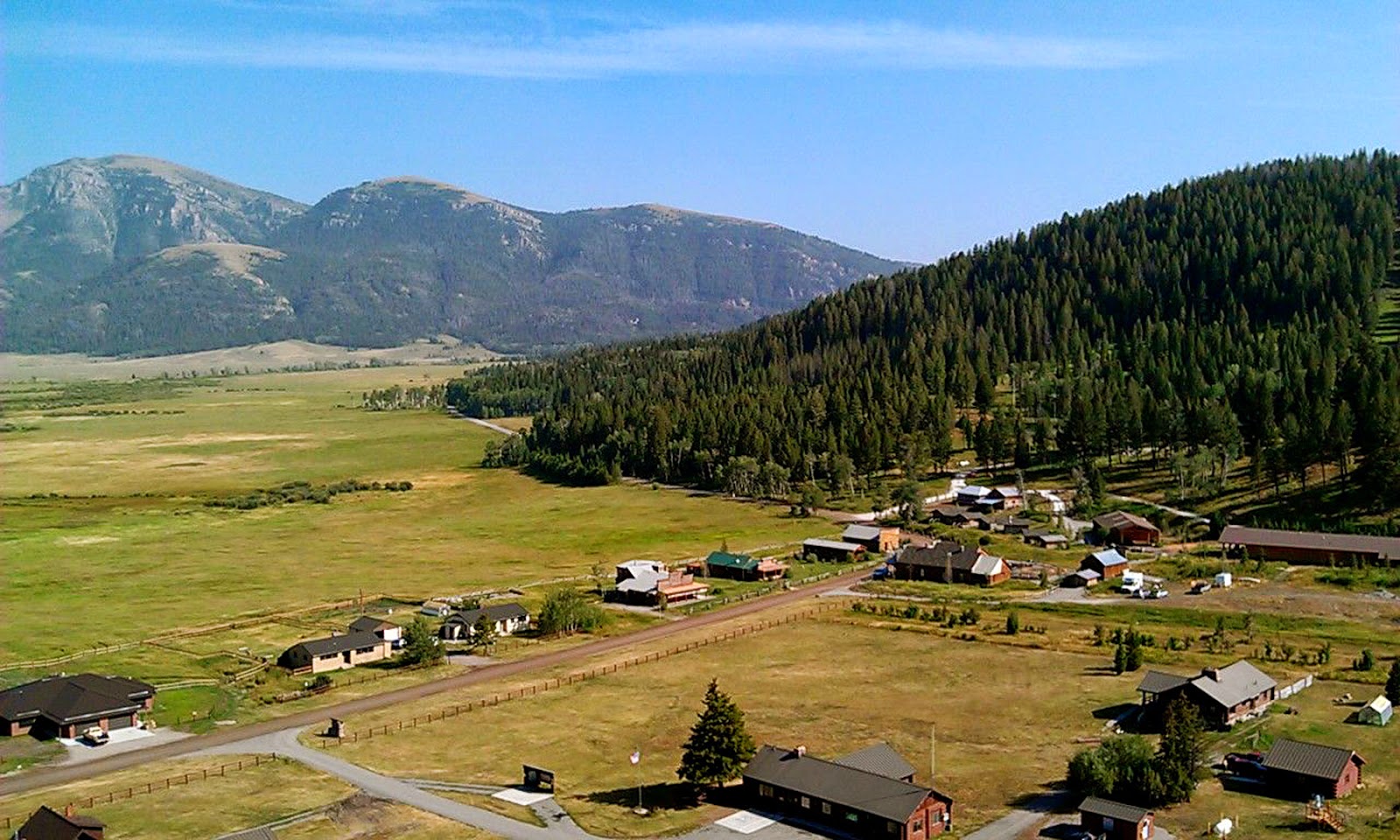 On my trip, this was the only place I saw another person. 3 days without seeing another vehicle. A hundred years ago the valley was home to several ranches, and a small community. The only thing that remains are a few wooden structures. 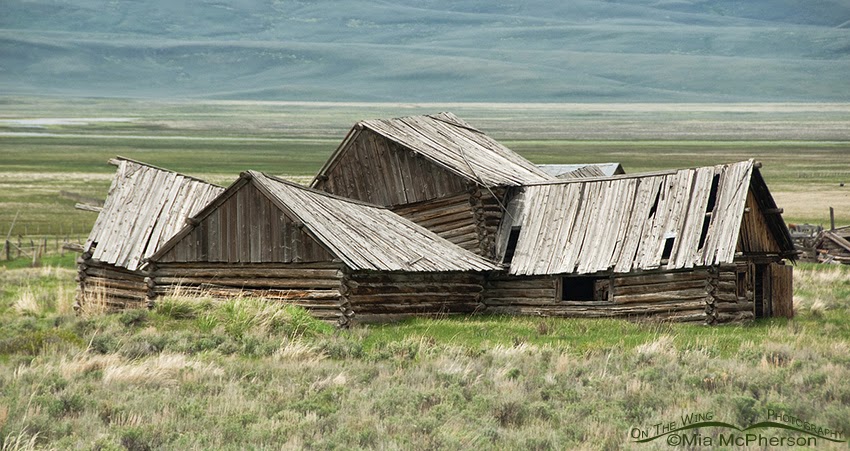 Near the head of the valley there are a couple unmarked dirt roads leading off to the north. Taking one, I found this lake, a fine place to camp. 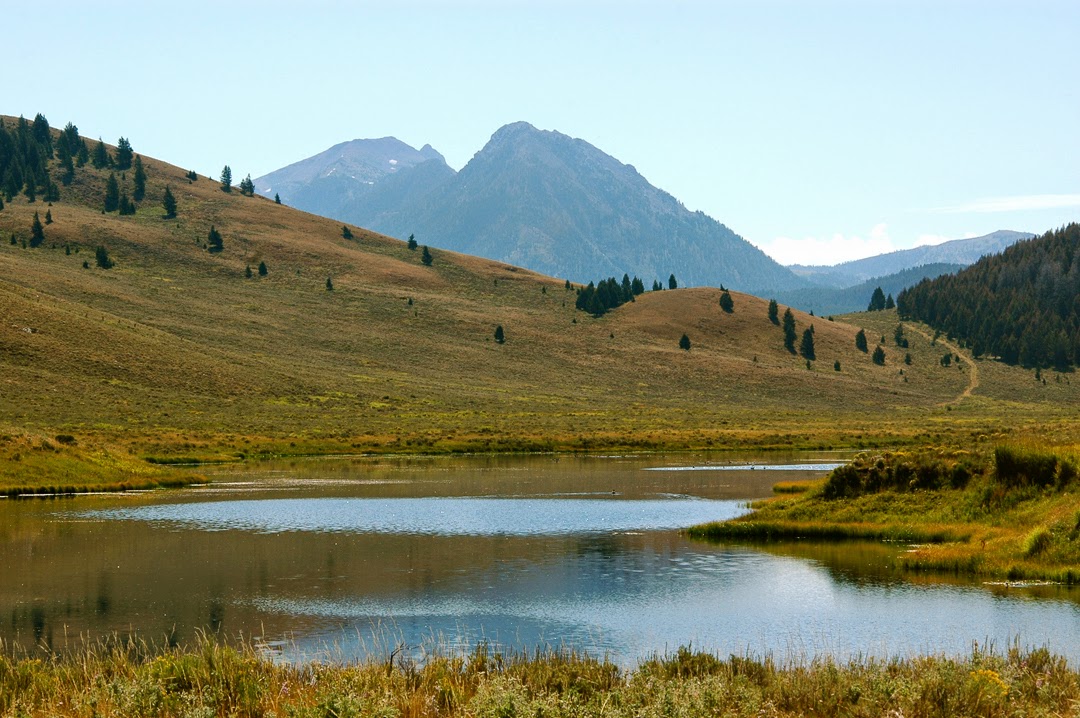 I made this my base for two days, exploring and wandering down this creek: 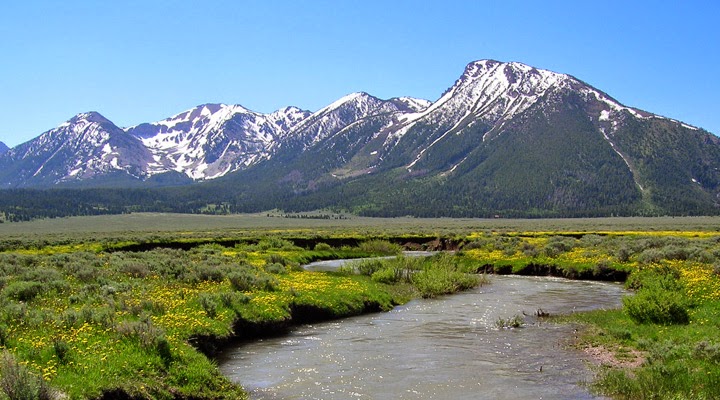 I had thought that the Big Hole river had Montana's only population of river-dwelling grayling. This is the first fish I caught:

When they are first out of the water the colors are almost iridescent. I made sure it was only out a few seconds, long enough for a picture.

On the drive in and the two days I was there I saw a fair amount of wildlife, Elk, which I spooked getting out of the truck and only got this. I must be scary. 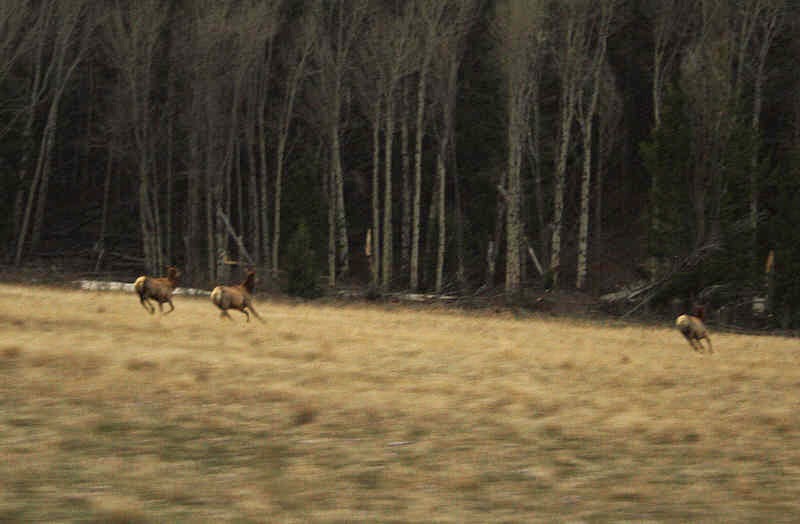 The antelope were less impressed with me. 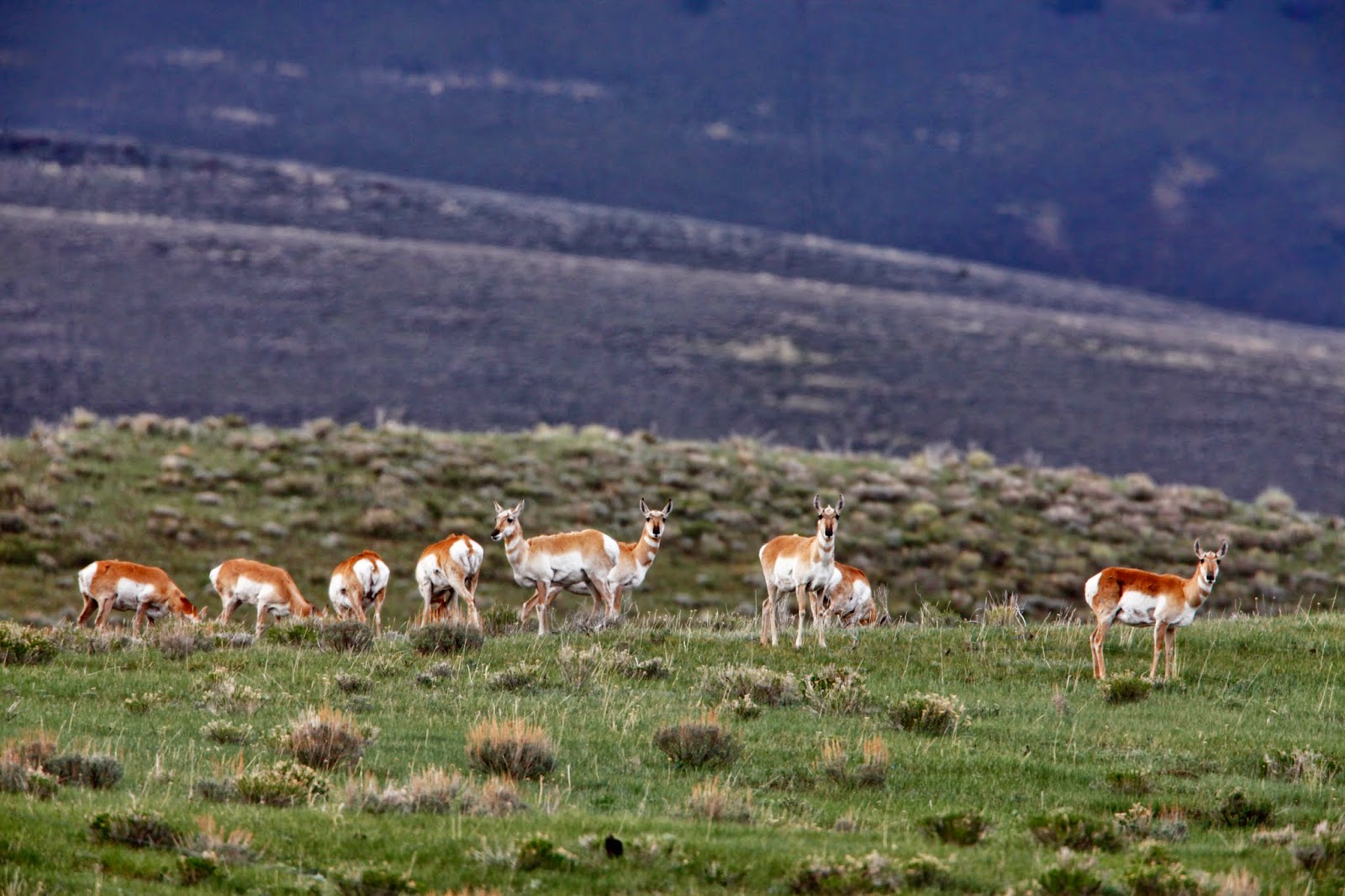 I left early on the last day, as the road climbed up towards the pass into Idaho it got progressively narrower, but still no other vehicles were seen. Then as I was going down the other side of the pass, through a slowly widening valley, a movement caught my eye. I stopped, and peered, not sure of what I was seeing or had seen. Then I figured it out. 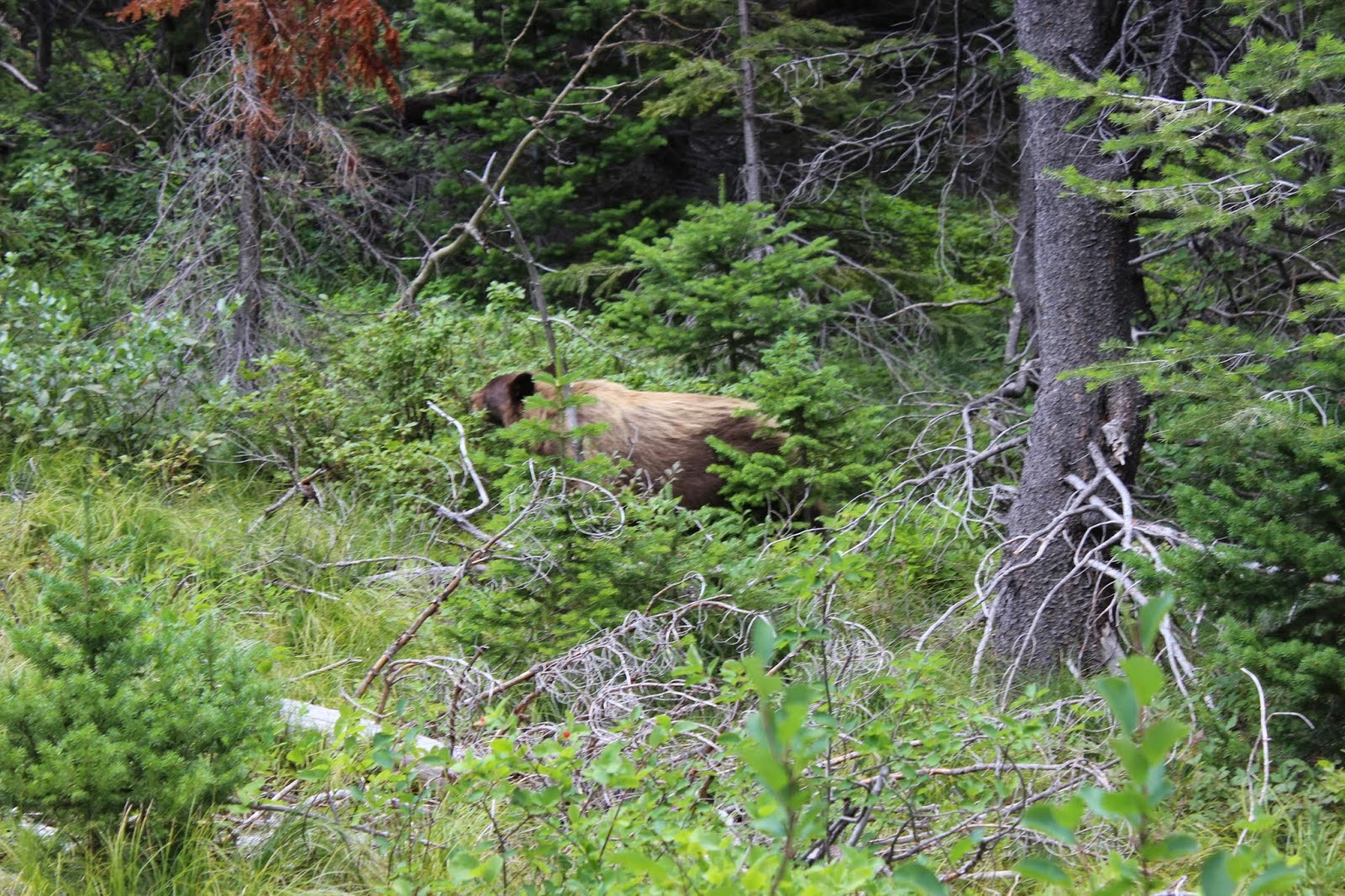 As I took one picture it moved off and disappeared. I'm pretty sure it was a boar, a big male. No way to know for sure, but I'd guess it was 600 pounds. Adrenalin kicked in, I got back in the truck and looked for several more minutes, but only got this glimpse.

An hour later I was in Henry's Fork, back in what passes for civilization up here. First cell reception in 3 days.

West of here some miles there was a leetle accident a day or so ago. You know how manufacturers of big things often source out the parts? Well, Boeing has jumped on that train, so to speak. They have different parts built elsewhere and ship them to Seattle for assembly. This includes the body of the plane.

Imagine you're a rafter on the Clark Fork (of the Columbia), doing the canyons west of Missoula, come around a bend and see this: 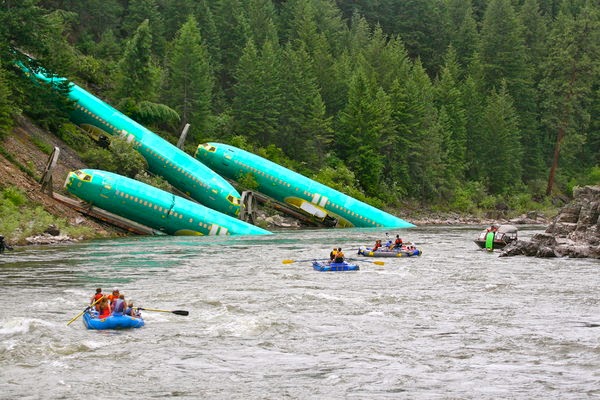 Remember that scene from 'Apocalypse Now' when the riverboat goes by the tail of a B-52 sticking out of the jungle?

Good thing they weren't fueled up.

Early Morning Fishing in the the Pintler Range

Coffee sloshing, I left at 5am for the Anaconda-Pintler mountains, 15 miles to the west. I had woken at 4:30, hungry, and got it into my mind a breakfast of fried brook trout was what I wanted. 45 minutes later I got to the place where I knew had abundant numbers of the things, a tributary of the Big Hole, around 7,000 ft elevation. It was just as the sun was hitting the meadow, it had rained the previous evening and a few wisps of clouds and mist clung to the doug firs. 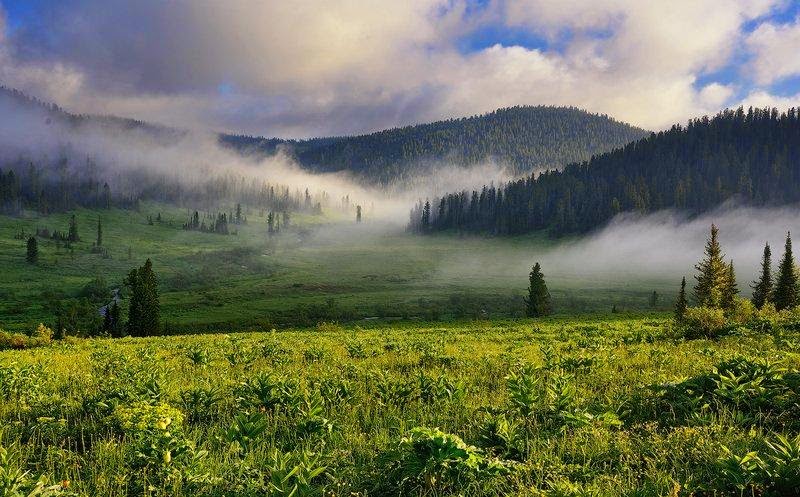 If you look closely mid-way down on the left, the stream is visible. Notellum creek I call it. It has another, real name, but it's my place, so.....

I have been here many times over the years, sometimes with one of my girls when they were visiting. I've seen moose before, it's a springtime calving area. And once I saw a grizzly, loping away up into the timber.

I rigged my dad's bamboo rod, this is about the only place I'll use it, it's 80 or so years old, and I don't like to strain it against larger fish. Half an hour later I had two of these and walked out.

Probably the only trout I'll keep this year, and a fine breakfast it was.