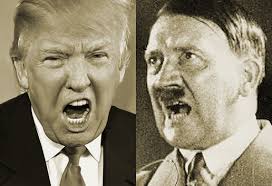 A story surfaced today that trump called a Philadelphia Inquirer newspaper woman reporter a 'c###' in an interview.  Not a rarity for this presidential candidate, he's called women a variety of derogatory that no one uses who want's to be liked, much less consider for office.  Nothing he seems to do or say, that anyone of conscience would advocate, he says and his supporters, and worse, others, shrug. He gets a 'by' on everything.  He insults women, minorities, anyone....

Recently he's said on national media that a contest winner was fat. Then he doubled down on it, just in case someone had misunderstood him.  The woman is Hispanic, he suggested she could be a maid at a hotel.

He said he'd consider first use of nuclear weapons.

He does not disavow white supremacists organizations that support him.  He has made racist comments in many of his public comments.

Makes absolutely no difference.  In any other candidate in US history, this would have assigned him to the dustbin of politics.  Not Trump.

He has a following. A group we'd not realized was there: a white, racist, oddly ignorant large percentage of our neighbors I had no idea existed. The ones who, hearing his demagogue, nod approvingly while I'm shaking mine in disbelief. Many are disguising their prejudices with a mask of 'here's why we hate, with a virulent, seething hate' of Ms. Clinton. There are columns, blogs, etc out there that spew hate about her, very little with substance, and in the same breath pronounce that they do not necessarily 'support Trump'.  Yeah, sure.

There is precedent.....and it's becoming more and more relevant:  Germany, 1933.  The economic differences are profound. We're not floundering, we have no inflation, it's not the same.  But, we have the same population, mainly white and male, who are seemingly eager to don the brown shirts and hit the streets.

What do you make of this?  I expect there are a couple of you, you who never comment on my blog, who are all for this.  You learn we white people ain't gonna be the majority in a few years. That you are unprepared for a change like this, and want someone to hate.

The fact that at the moment, almost an equal number of registered US voters might vote for this imbecile, astounds me. 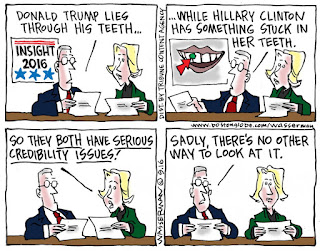 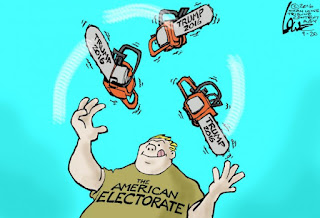 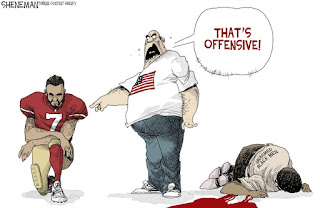 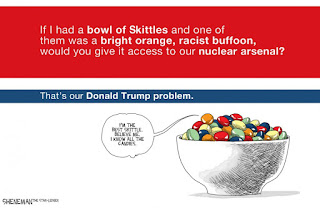 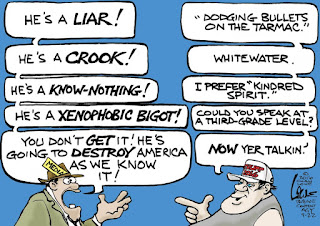 A buddy sent me this photo, taken this morning.  Apparently the rain I drove through over Lookout pass turned to something else.  It's not winter yet, but it's rearing it's head. 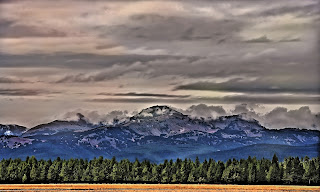 Last meal before the road

Has anyone noticed that lately I either rail about politics or go on about food?  I hate to be predictable, but I'm hitting the road early in the am for the 600 mile jaunt to Seattle.  Across the western part of Montana, the panhandle of Idaho, and the seemingly endless straight freeway across the eastern Washington desert.

So perhaps knowing my trials and tribulations tomorrow, the fine neighbor across the street fixed dinner for me tonight. Actually, she let me have some of what they were having, after I had begged long enough.

A brisket she's been cooking all day, on a baguette from the Underground Bakery. 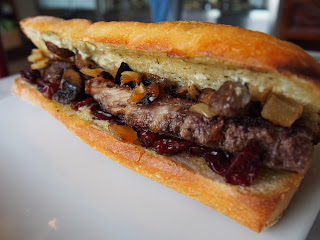 And some cole slaw, with a bit of the hatch chile I had 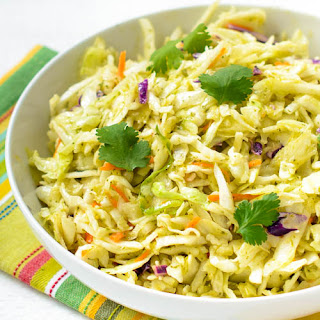 A geezer of 70 could do worse, eh?  If age teaches nothing else, you learn how to play on the sympathies of the younger neighbors.

Fortified thus, I'll drive across the western US in the am.

I'll write from the Emerald City when opportunity presents.

Fret not, there are cheeseburgers!

Yes, there is plenty to worry about......look around, you may have as many as 3 out of 6 of your current neighbors thinking about voting for Trump. Or, you have my sympathies, you may live in surroundings that have even more. My condolences.

Anyway, I'm here to suggest this is the end of times (in the biblical/cultish sense), and there is nothing we can do.  Yes, yes, you're correct: we can moblize, get the dems out to vote, convince Trump supporters they need some psych counselling, etc, but beyond that, there is little we can do. I the American people are going to go ape shit nuts, there is nothing we can offer in the way of paths to sanity. It's too far gone.  Sayonara.

What we can do, in our waning days, is have a decent cheeseburger. 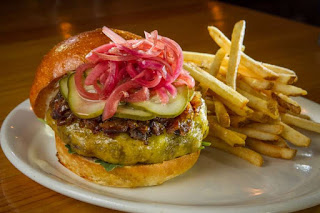 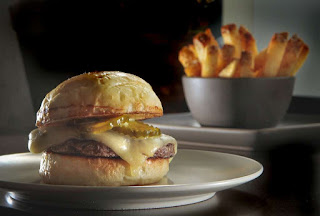 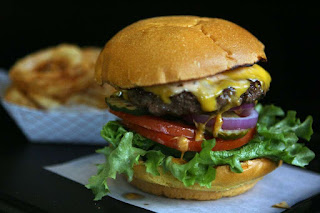 So anyway, if your LDL is less than 120, have at it. Wait.....my attorney just called, forget that number. Believe what you want, but pay attention to any chest tightness, sweating, someone sitting on your chest, feelings of doom, etc. Don't call me, call 911.

Not diverted any more...

Hillary could have Ebola and still be the best choice. 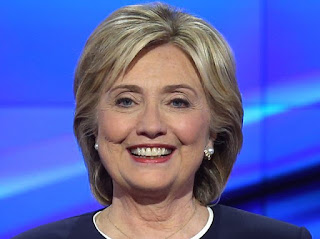 Diverted, once again, to food.

I was going to do a post about the latest thing the GOP and some media (and the odd blogger) are buzzing about how Hillary is eating human babies and on the payroll of the Stasi, but I got diverted by some Hatch chili that arrived at the market recently. I roasted and skinned some, and have been casting about for how to use them. The usual doesn't sound good, so tonight I mixed some with some local hamburger. 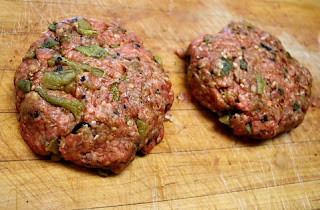 I made two because I got too much burger.

Then I asked the baker at Underground Bakery (the only European style bakerie I've found in the US) if he'd make me a couple of hamburger buns, not a staple in his inventory.  He agreed, and did a tray of them today. I got two. 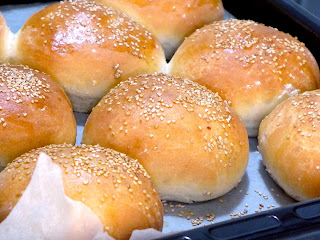 I think they'll be good, though in the past Hatch chilies have occasionally surprised me, and caused my stomach to wonder what the hell my mouth was doing.  So we'll see.

It seems to have gone on forever, this linking protests and actions like Colin Kaepernick's and John Carlo's of decades ago (who I've met, and was a fine guy) with showing disrespect for people in the military or who have been in the military.  I'm having none of it.

I was in the military, and was in one of our countries fine little wars, part of 1966 through most of '68, with a short recess in Bethesda Medical Center. To say that someone who is protesting the way our country has treated and is treating minorities is somehow insulting me by choosing to not stand for the national anthem is bullshit.

In fact, if the national anthem is somehow linked to the war we waged in Vietnam, I ain't standing either. We barged into the middle of a civil war that had been going on for decades on a trumped up charge (Gulf of Tonkin Incident) and probably supported the wrong side.  The 'domino theory', that if South Vietnam fell to the North communism would spread around the globe was a load of crap.

Just speaking for myself here. Only three other vets I know about that read this, and I don't speak for them.  If somehow not standing during the anthem can move us one micrometer forward in the arena of racism, I'm sitting too.

Fall has arrived, on small feet....

Today on a drive over the Pintlar Mtns, just west of here, one of the many ranges of the Northern Rockies.  It rained much of the day yesterday at 6000 ft, but at higher elevations it got it's first real snow. We're discounting the snow in late July as the last snow of last year. This is the first of this year. It may seem like quibbling to you, but when you live here it's an issue of some import. 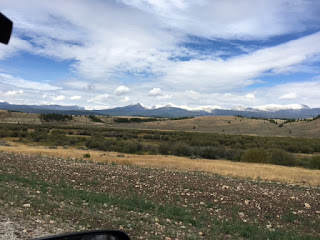 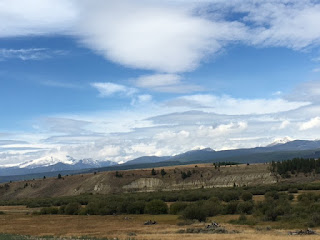 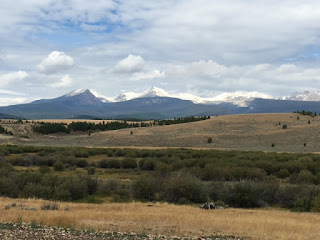 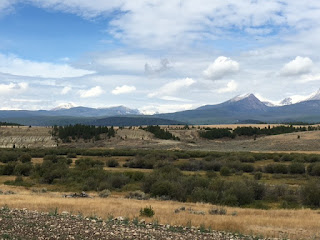 Fall is here, the forecasted high for the next week is under 65, and the low reaches down to 28. Winter isn't here, but it's waving just over the hill. 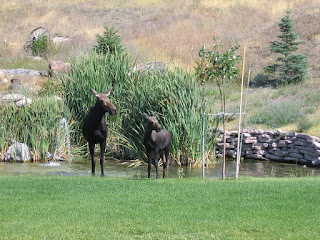 From the Montana Standard:
Par for the course this time of year, four moose eluded capture Thursday – three off Little Basin Creek Road and another at the Butte Country Club, authorities said.
Game warden Regan Dean said attempts were made Thursday morning to shoot two cow moose and a yearling with tranquilizer darts in the Little Basin Creek Road area southwest of the Copper Mountain Recreation Complex. They had been there for a few weeks and were "bugging people," Dean said.
One cow chased a few homeowners, Dean said. No injuries were reported.
After initial reports came in, the agency coordinated with a Bozeman-based veterinarian capable of tranquilizing wildlife – thus delaying the response to remove the moose. The animals escaped eastbound in the direction of Timber Butte.
Summer in Butte.