Excuse any typis, my R ring finger is stilk numb, so can't alkways tell what key it's ion,,,,,, 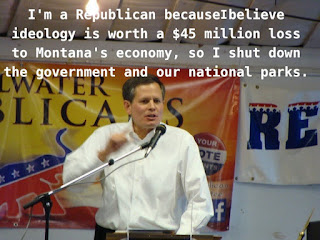 So, surprise surprise, the good Senator Daines, responded to one of my emails, remember the Planned Parenthood video one? The one where he referred to it as accurate, long after it had been proved manufactured from whole cloth, and the makers indited in federal court? That's the one.

I posted here the reply where I pointed out the proven falsehoods in the video, and chastised him for referring to it as accurate.

Then, nothing.....until the other day when this, reprinted in part and nothing lacking in terms of meaning, went:

"Thank you for contacting me to express your support for federal taxpayer funding of Planned Parenthood. I value your point of view and appreciate the opportunity to respond.

While you and I may disagree on the issue of abortion, I hope we can find common ground regarding federal taxpayer support for Planned Parenthood harvesting and selling organs from aborted babies. The recent revelations provided by videos of Planned Parenthood executives discussing the harvesting and selling of organs from babies they have aborted are disturbing and raise significant moral and ethical questions."
So, it's like if he just repeats a lie often enough I'll buy it????? What a tool!
So, there he is, the current Senator from Montana, Steve Daines. Prevaricator, willing to do anything to stay a Senator, and opposed to damn near everything I believe.
Posted by Should Fish More at 6:08 PM 16 comments:

Late Thursday Back When

Me, with a quintessential English Icon. Around 2005, taken by youngest daughter. 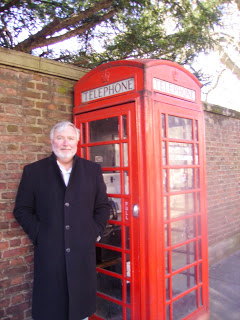 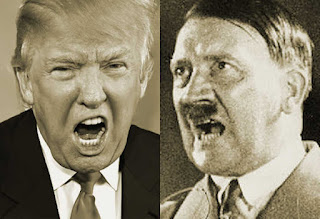 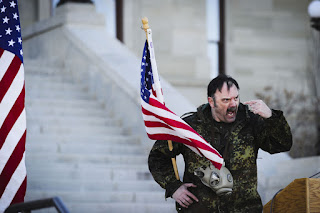 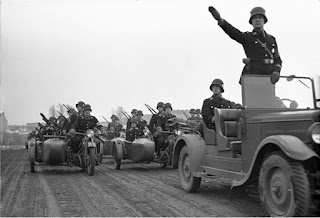 Could be a brand new day, Amerika.

Just in case you thought we lived in a sane world....

On Saturday Night, Alex Jones, conspiracy theorist extraordinaire, went on Facebook to give an emergency transmission to his believers.

Jones: My friends, it's Saturday night, this is an emergency transmission.ones: The question is, was Antonin Scalia murdered? And the answer to that is, has the Bill of Rights and Constitution been murdered? Has it been reported that members of the Supreme Court have been blackmailed? Yes it has.

Donald Trump’s appeal to American patriotism has become one of the gravest worries of Democrat Party elites, particularly if he taps Sarah Palin and former President George W. Bush for his adminstraiton, as some have suggested. They fear his passionate populism could lead a revival in both houses of Congress. A strong Republican presidency would almost certainly derail any liberal globalist schemes and prevent the United Nations from seizing more of America’s sovereignty.

Nimoy has been consolidating Illuminati power since faking his own death.
Nimoy’s Hand in the Assassination
The wild card in this equation is likely Leonard Nimoy, who various leaked reports have identified as the newest leader of the Illuminati. While there is much debate about that secretive group’s ultimate motives, many citizen journalists suspect that they are expanding their control through both European-style socialism and Bilderberg-group branded international cooperation schemes. The recent Climate Change summit is the perfect example of this, as it gives foreign authorities the power to override both Congressional and Constitutional protections. As many know, the presence of the United Nations on American soil will lead to gun seizures and restrictions on Christian freedom of speech.

As I frequently say, I can't make this shit up.
Posted by Should Fish More at 7:07 PM 9 comments: 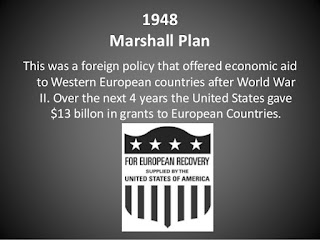 How the World views us now:

America's Agitator: Donald Trump Is the World's Most Dangerous Man

AFP
Donald Trump is the leader of a new, hate-filled authoritarian movement. Nothing would be more harmful to the idea of the West and world peace than if he were to be elected president. George W. Bush's America would seem like a place of logic and reason in comparison. Der Spiegel, 2/1/16

How We View Ourselves: 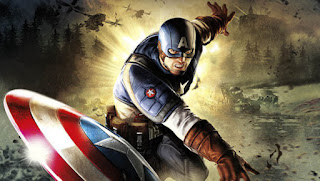 Ok, well then wherein lies the reality?  Before you start saying "Oh, that's just extremes, we're really just nice people, moderate, nothing like people think."  Really?   Tell me about Texas, Utah, Nevada, the 'open carry' movement. Tell me about the roughly 30% of republicans that support Trump. Tell me about the despicable Mr. Cruz, and his views on anyone not like him or his supporters (another roughly 30% at present).  Tell me about the 300 million guns out there in private ownership, tell me about the NRA who gains support and money with each school massacre. Tell me about our two political parties, one seemingly mostly rabid misogynists and racists, the other cowering and saying 'don't hurt me' to anyone with conservative leanings. Tell me about the people, a lot of them, who think our constitution and laws were handed down by god.

"...what rough beast is this, it's hour come round at last, slouches toward Bethlehem to be born?"
Yeats