Trump every evening has aides bring a goat into his bedroom, the goat is led out later looking distraught.

Trump lies down on his carpet in the oval office and kicks his heels on the floor, flailing around when he hears things he doesn't like.

Trump paid prostitutes to do odd things in front of him while in Moscow.

I have many, many more.

As soon as trump gives the proof of his claims about the conversation with the slain soldier in Africa, I'll give you my proof of these.

Donny boy, you there?  You feckless moron?

I'd like to see a relic of the French revolution, used on Marie and the Sun King, set up on the white house lawn, and used as intended.

I guess I've been an out of touch idiot

Just how many of you motherfuckers are out there????? The latest headline from the Oregonion:

Mother of effing god. Even with two daughters, I didn't grasp the pervasiveness of the issue. I guess I'm the epitome of how this got 'overlooked', not reported, etc. I'm so sorry.

I wish I'd been more cognizant. More aware, some damn thing. I'm sorry, day late and dollar short.
Posted by Should Fish More at 5:54 PM 18 comments:

Not the first, not the last 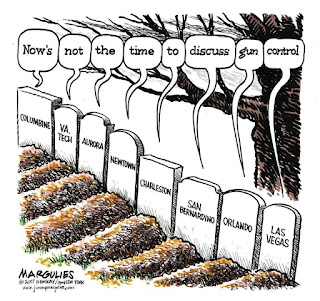 A first: a repost

This was posted a year ago, and seems more pertinent today.

It seems to have gone on forever, this linking protests and actions like Colin Kaepernick's and John Carlo's of decades ago (who I've met, and was a fine guy) with showing disrespect for people in the military or who have been in the military.  I'm having none of it.

I was in the military, and was in one of our countries fine little wars, part of 1966 through most of '68, with a short recess in Bethesda Medical Center. To say that someone who is protesting the way our country has treated and is treating minorities is somehow insulting me by choosing to not stand for the national anthem is bullshit.

In fact, if the national anthem is somehow linked to the war we waged in Vietnam, I ain't standing either. We barged into the middle of a civil war that had been going on for decades on a trumped up charge (Gulf of Tonkin Incident) and probably supported the wrong side.  The 'domino theory', that if South Vietnam fell to the North communism would spread around the globe was a load of crap.

Just speaking for myself here. Only three other vets I know about that read this, and I don't speak for them.  If somehow not standing during the anthem can move us one micrometer forward in the arena of racism, I'm sitting too.