Opinions and Things that go Bang

There was an article in the New York Times yesterday about a firearms writer/author being fired for some comments on assault rifles and their inappropriateness for hunting or civilian use. It was also covered in several national media sources, including Fox news. The writer, Dick Metcalf was fired from Guns&Ammo, perhaps the most popular of the gun magazines. He said, in brief, that the second amendment was no different than other amendments, that it is subject to regulation, interpretation and is not immune to change.

Mr. Metcalf has been a writer for the magazine for years, and was a popular shill for the gun industry right up to this article. It was rather startling to read it, given his past writing. The history of writing and opinions about guns is notable for the absence  of anyone changing their mind about it. This is the only one that comes to mind. You're either for gun control, or unalterably opposed, and never the twain shall meet. And rational discourse is out of the question.

It made me think about the writing I've seen in the past year or so about guns and hunting. I read several 'outdoors' blogs, most about fishing. Few of them will touch the subject of gun control with a long pole, knowing that even the most subtle inference that guns are for anything but worship and hoarding, and the government want to take them away, will meet with swift condemnation from some readers.

I was going to start this post with the same lead I've read by several writers of my liberal ilk:  "I've been a gun owner and/or hunter for decades, etc, etc." It seems to be a way to distance oneself from those 'knee-jerk socialists who want to take away our guns", and to establish one's street cred, so to speak. Then I thought what's that got to do with it? I also have an opinion about eating the Durian fruit, but I've never seen one.

Then I thought what the hell, why should one have to do that to state an opinion? About the only writers that need to have 'been there, done that' are travel writers, and one can even pull that off if you've got google and the internet.

If anyone can explain to me why the 2nd amendment should not be regulated, as the rest of them are? It even has the words "well-regulated" right in the damn thing. Try standing outside a federal building and shouting death threats, then citing the 1st amendment as your defense.

The NRA with their attachment at the hip to the gun industry has been more effective than any other lobby in influencing legislation. Name one congressperson or senator who would advocate gun control who has any influence. In either party.

Back to the Future

I've now seen over 50 new years mornings as an adult, and am finally willing to admit I may never make it to the Bigs. I am/was a decent fielder, but my curve is not impressive to most little league hitters. And the NBA is probably out too, while I have/had a good jump shot, as my college coach said "You don't have the speed to make it in the (then) PAC8, and you're too short".

That really hurt to finally say.

Anyway, had a great Christmas with the fam. The 3 year old granddaughter got to play in the smattering of snow Seattle got before it melted. 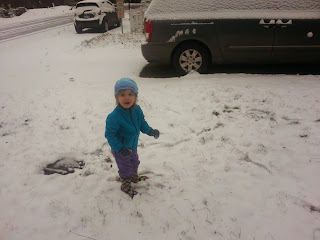 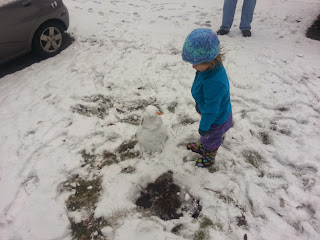 She even built a snowman.

Now it's the Rose Bowl, in which my beloved Ducks are not playing, but I'll manage to root for Stanford.

Hope you all have a interesting New Year.