Connections to the past

I don't think I have anything unique in this regard, but.......one thing that drew me into history, and the grad program at UC, was the connection I've always felt to the past. I was a late child, born in 1946, to a father that was in very late middle age, at best. He was born in 1889. Yep, you read right. My father was born before the Spanish-American war. His dad was born in 1856, nine years before the Civil War. My grandfather was of an age to remember well the civil war, except he was in Oregon, where it was not a part of day to day life.

I grew up hearing stories of life in Oregon before electricity, cars, and most things we think of as everyday life. Going fishing on the McKenzie River in a wagon pulled by a horse with his brothers, camping where now there are suburbs and malls. The Willamette Valley before there were paved roads, let alone freeways. His stories of the depression, when he and his brothers took to the rails, wandering the US looking for work. He had a game-to-game contract with the St. Louis Browns, and according to his brothers was a hell of a pitcher.

I"ve always felt that through my dad and grandfather, I have memories of life long past. It's given me a life view that hasn't always been helpful to everyday life. I saw the war in Viet Nam as an extension of the policies of containment laid out by George Kennan in 1948, this while on the ground there as a corpsman with the Marines. I had a lot of Marines listen to me and shake their heads in either wonderment or boredom.

I see the drug laws and public attitude with a view of how laudanum was popular in the late 19th century.  I drive over the Willamette Pass past Odell Lake in Oregon, where the old state highway crew barracks were, and hear my dad on the radio talking to the drivers plowing snow, the only way they could communicate. I remember the kids from Brooklyn who came out to Silver Lake, to work for the USFS in the summer of 1963, as part of LBJ's Great Society program, having taken a bus cross-country. First black kids we'd ever seen, and at the time I thought of FDR's CCC program. Neither my buddies or these Brooklyn kids had ever heard of him.

I'm not saying that I have any special knowledge, or any special aptitude, heaven knows. It's just that being seeped in the past, I tend to live there, and see things through that lens.

While living in Germany, we took several trips around Europe. Our favorite, at least my favorite, was Italy. We went to Venice for the first Thanksgiving, and in March went to Tuscany for a week. A friend from the states came over for the trip, and through contacts of hers we were able to rent a house in Montefioralle, a hilltop 'castle village', overlooking Greve in Chianti.

Montefioralle was first noted in documents around 1050, and was a military and administrative center for the local governing family. It had, and has, a wall around the town, with houses built into the wall. 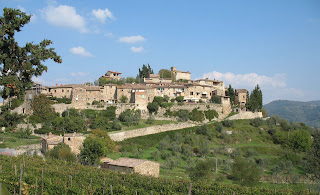 It has a 'street', generally too small for cars of any size, going around inside the town. I would guess the population is around 500, and when we were there no tourist housing was present. We were fortunate to have our friend, L., along, who had a friend that had family that owned a house. Also, she speaks Italian, a big plus, it wouldn't have been the same trip without her. 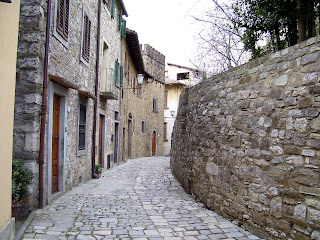 Our place was the first door on the left side, two stories, a worn stone staircase going up to the second floor, where we lived. My understanding is the second floor had been constructed in the mid 1700's, and electricity brought in perhaps in the '60's....wires coming through the windows and walls. The bathroom was about 5x4', sink and toilet, and the 'shower' was a faucet head in the middle, near the window. One had to take everything out of the bathroom to shower, and the hot water would last maybe 3 minutes. There were two 'water heaters', one in the bathroom and one in the kitchen. You had to be careful about using too many electrical things or a fuse would go. A couple doors down the street was the birthplace of Amerigo Vespucci, marked only by a wasp engraving over the door. 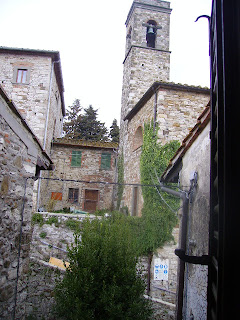 The view from the kitchen 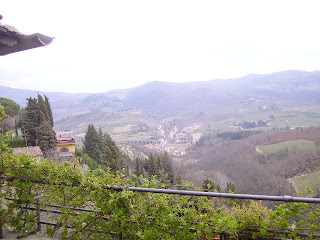 The hills of Chianti from the terrace outside the kitchen, opposite side from the previous picture 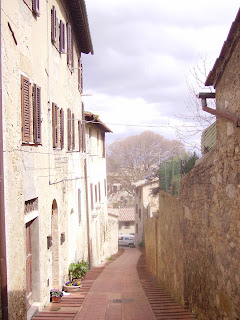 The same street on the other side of the village 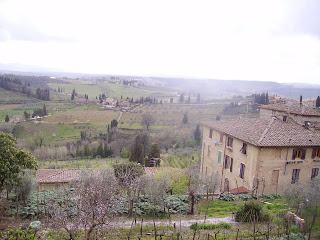 The land around the village was agricultural, with lots of olive trees. Down the hill in Greve, you could get olive oil in a couple shops from a big vat, you bring your own container. If you've never had good olive oil, it's delicious. One can actually sip it like wine, it's that good. 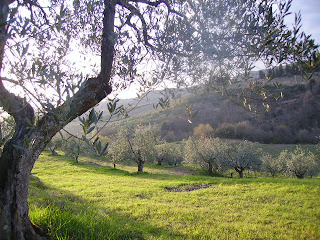 Olive orchard just outside the village 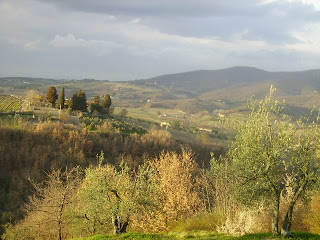 In the week we were there we took day trips, to Sienna, where the famed exercise in treachery, bribes and anarchy, the Palio, occurs every Summer. It's a horserace between districts of the city. 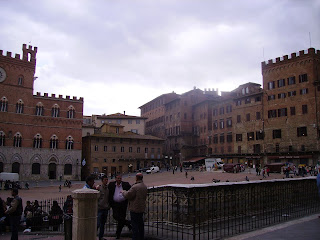 We also went to San Gimignano, the city of towers 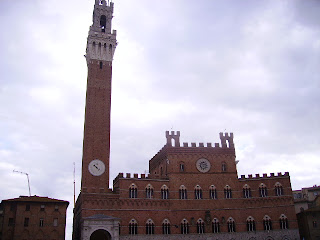 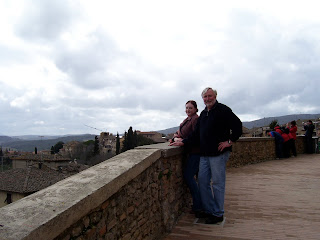 We also too trips to Rome, Pisa and Florence, I'll post pictures of that another time.
Posted by Should Fish More at 9:06 AM 4 comments:

Late summer of 2007 my company asked if I would go to Europe to work with our German branch to integrate their product into our corporate fold.....be the borg, so to speak. I agreed, feigning reluctance, and stated my conditions: a company apartment and car, and some autonomy regarding actions while there. The German branch had been acquired a few years before, and had not successfully been integrated into our way of doing things; of business and the company mind-set. We'll set aside the notion that I was the wrong person to send: I don't like Germans (as a group), and have little patience with those who don't agree with me professionally. So...an experiment doomed to failure: sending an intractable geezer to work with German engineers to convince them to modify a product they deemed perfect.

What it did do, was give me 9 months in Europe. My youngest daughter, Emily, upon hearing that I was going, said "Hey, me too!" So I had a companion, a 21 year old who had not been to Europe. "Cool", I thought, "What could possibly go wrong with this!?"

Nothing went wrong, to fend off misconceptions, it was a throughly wonderful experience for her and me. To see  Europe through new eyes was a great thing. I had been several times, but never for more than 2 weeks at a time. I found the experience of actually living there, day to day, shopping, getting laundry done, cooking, etc, quite different than living in a hotel.

In early October, 2007 we flew to Frankfurt, a driver picked us up, and drove us 140km to Bad Kissingen, the town near our German branch. They had a 2 bedroom apartment ready for us, quite spacious by European standards, and we started our stay. 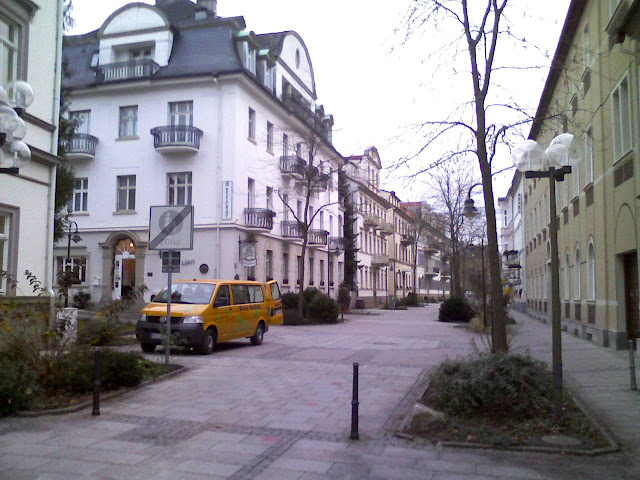 Directly behind the yellow vehicle is the Weiss Haus, a great restaurant where we ate at least twice a week. our building is the next one behind it.....built in 1793, remodeled several times. 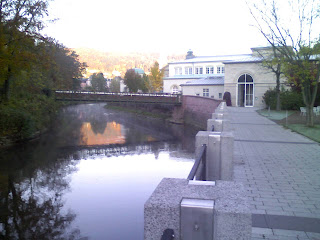 A block away, the river Saale, taken on a Sunday morning early. Once I was standing looking, and saw some rise-forms on the river, and found later there were trout in the river. 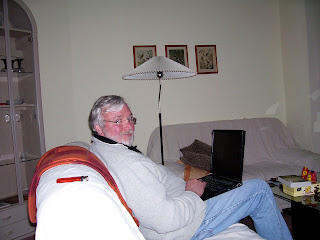 Me 'working' from home. 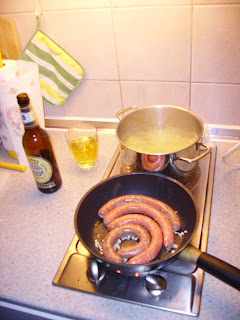 Ah, the food available there:  the kitchen was the smallest I'd ever had......the stove had two burners and a small oven...the fridge was 3' high, the sink water heater was above the sink on the wall, and would heat about 2 gallons of water at a time. But the food we could get at the local markets. The wurst, brotchen, brot, rabbit, fish....man. There were 5 bakeries within walking distance, all with different breads available each day...geez. And of course the local beer.

I'll do posts about the trips we took while there: Venice, Florence, Rome, Tuscany, Austria, Munich, Erfurt and the UK.

The news about Bin Laden is just breaking, I hope that we don't see too many repercussions from it. My son came back last summer from his second tour over there, and I'm happy they got him. I just hope our troops don't pay too heavily for it.
Posted by Should Fish More at 8:57 PM No comments: