I've had the opportunity to travel a fair amount in my life. A lot of domestic travel and abroad. I've thought about the idea of living somewhere versus visiting, beyond our shores and within. Also is it possible to actually be 'home' somewhere else, other than the place you think of as home.

With the exception of North and South Dakota, I've been there in the US. There are differences between say Los Angeles and Wichita, or New York and Milton Fl, but beyond the obvious palm trees or snow on the ground, one can function in one as well as another. The plains of Eastern Montana look different than the suburbs of Detroit, but the inside of Safeway looks the same. The people of Texas and New Hampshire may vote differently, but they communicate quite well about maple syrup and bbq. When you cross the state line from Washington to Oregon you don't think "Whoa!". 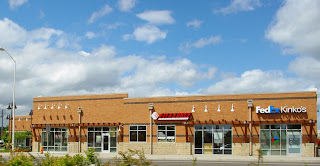 I've lived from Alaska to the Bay Area to Toledo to Annapolis. It was different, sure, sorta. But it was really the same, outside the presence or absence of mountains and oceans. Daily life was pretty much the same, stores had different names but the same stuff. I wasn't a 'stranger in a strange land'. I've been disgusted by pictures of KKK rallies in a South Carolina cafe, but not surprised.

Abroad, it was different. I've had the chance to live in a different country twice. I've traveled in Central and South America, Europe, and Asia. In the late 60's I lived in Japan for almost two years, working at the Atomic Bomb Casualty Commission hospital in Hiroshima. I lived in a small town, almost a village, about 10 kilometers north of the city and commuted on a train. Everything was different, from the house to the shopping to the language. A block away from my house there was a tea house that delivered beer twice a week in wood boxes to my door. 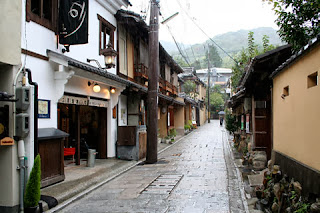 Long story on how I came to be there, but at the time I thought I'd never leave; I was going to become Japanese, this would be my home. I learned the language passably well, I immersed myself in 'Nihongo', and would go months without speaking English. Everything about the culture was different from what I'd grown up with. Idea's of privacy (you never ever just 'drop in' on someone at their home), expectations of life, and one's place in the world were different.

It took me over a year to figure out that I could live there for the rest of my life and never be 'Japanese'. I'd always be an outsider, looking in. All the wishing in the world would not make it so.

The next time I lived outside the country was decades later in a different hemisphere. Germany, again working, but with no plans or even wishes to stay permanently. 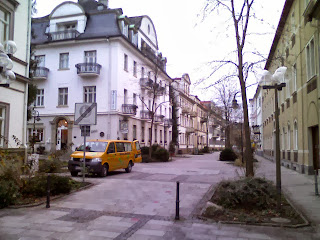 This time, with no illusions of 'becoming', I was able to notice and process the difference between 'visiting' or vacationing, and 'living'. I was able to experience day-to-day life, working, shopping, living. The rhythms of life when the size of your kitchen and fridge require daily shopping, the attitudes of coworkers, the interactions with neighbors. And to compare and contrast this with what it was like at 'home'. I had been to Europe enough before for it not to seem 'foreign', and move beyond staring at  old buildings. I had time to take a Saturday and sit in a market plaza and let coffee cups pile up, not worry about wasting time.

I was also able to see the difference between travel in Europe and at home. The scale is so much smaller there; often a few kilometers, between one country to another or even from a city to it's outlying towns can bring real difference. A days drive can easily take you from Germany to Italy, and the two are very, very different in most respects.

Where was I going with all this? Good question, maybe it's just time on a Saturday morning with nothing else to do. Or maybe it's that we have this illusion, reinforced by the fact we can get in our cars and drive three days and still be in the same place, that the whole world is like this, and like us. Or maybe it's the illusion that we can truly change into something else, we can change from what we are to something very different than our upbringing and genes have made.

Or maybe it's this new coffee I'm trying.

Most of you have read about the Higgs boson, or Higgs particle. A elemental particle thought to be pivotal to the standard model of particle physics. How the physical world is put together and works. It was theorized in 1964, but only as a possibility, and not confirmed for nearly 50 years. The theory was based on circumstantial evidence, and were it a criminal trial the defendant would be said to be not guilty. It was also based on scientific imagination......the cumulative result of knowledge from the past and present, then the undefinable "Eureka!".......the "I can't prove it, but it's gotta be...."

There are many other examples of this, but the one that occurred to me was that of Marie Krogh. 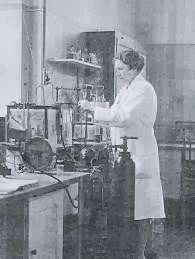 Marie Krogh (1874-1943) was a scientist and physiologist living in Europe. Around the turn of the century the theory of how oxygen got to the cellular level to be used in metabolic process was active secretion of oxygen by the lungs, it's adherents were the chief scientists of the day: Bohr and Haldane. To disagree with them about their theory was tantamount to professional suicide, similar to a first year undergraduate telling his Nobel Laureate department chair he was wrong in his work.

Marie Krogh, working with her husband August, published a paper in 1909 in the scientific journal Skand Arch Phiol refuting Bohr's active secretion theory, claiming oxygen actually passed across the alveolar-capillary membrane by passive diffusion; that the partial pressure of oxygen, higher in the alveolus, passed to the lower partial pressure present in the capillary.

Then she did something that to me was remarkable: she described a test that could test the theory by delivering a small concentration of carbon monoxide to the lung, measuring the percentage inhaled and exhaled, and calculating the amount passed into the blood stream. She also calculated a 'constant', a mathematical factor that would be needed for the calculation of the transfer factor of oxygen.

The rub was that there was no way at the time to determine if she was correct. There were no mechanical devices or sensors that could perform the test.

In 1957, a noted pulmonologist, C.M. Ogilvie, read her paper published nearly 50 years earlier, and decided it could be done. Her theory and even the mathematical calculation of the constant turned out to be correct.

She didn't live long enough to see her theory proven, but I'm sure she had no doubts.