I was writing someone recently, and an occurrence that I hadn't thought about in years was brought up. So I thought I'd do a post about this kind of thing, and perhaps you've had similar ones. If so, I'd like to hear about it. 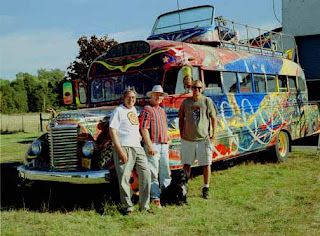 1970
I was going to school at Portland State University. A day or so after the infamous Kent State shootings PSU, like many other universities across the US, was shut down by protests. Barricades were made at the entrances from park benches, garbage cans and other things scavenged by the protesters. A day later marches occurred, I went on one to the city hall, but on the first day the school was closed I didn't want to deal with the protest. I was active in the local group of VVAW, and most of us felt the same way. We didn't trust ourselves to be non-violent.

So what did I do? I went fishing, of course. I got up early, went through downtown Portland, past PSU where I gave the protesters manning the barricades a mail-fist salute, and headed west. I thought I'd see if there was any spring cutthroat action on the Siletz River. Once I got there, I headed upriver, winding my Land Cruiser around the curves, and suddenly saw a house where none had been before. And a bunch of people, and weird looking equipment. It was a movie set! So I pulled over and parked in a dirt pull out area, got out and was watching the action.

I was standing there gawping, just another long haired, bearded guy, when this stocky, curly-haired, bald on top guy came up to me. I asked him what this was about, he told me that they were filming a movie. He said that it was titled "Never Give An Inch", though this was later changed to "Sometimes A Great Notion", like the book. Of course, it was Ken Kesey.

Then he said something that rather startled me: "Want to go smoke a joint with Paul Newman?" I must have looked like a deer in the headlights, but I replied that sure, don't mind if I do. We walked a short distance to a trailer, went in, and there was Paul Newman, sitting on a sofa. I was offered a can of Coors, sat and listened to them talk for a minute, then left when they had to get to work. The joint was never forthcoming, but hey, I got a can of beer.

Paul Newman was the more famous of the two, but what I'll always remember is meeting Ken Kesey. 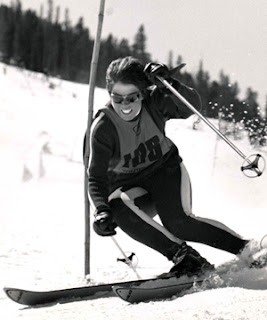 Ms. Saubert was a great skiier, winning two Olympic medals in 1964, a bronze and silver. She was from Lakeview, Oregon, and skiied at Mt. Batchelor, near Bend, where I lived at the time. I learned to ski at Batchelor, and by the time I was a Junior in High School, I was a part-time instructor in Jack Meissner's Ski School, teaching on weekends. I was a good skiier, but at that time two female classmates were in a class of their own: Kiki Cutter, who went on to be on the Olympic team, and marry the team coach, Bob Beattie, and Karen Skjersaa, a wonderful downhiller. I knew two females who were much better than me, so I shoulda known better.....

I don't remember the exact date, except it was the winter of 1963, and a weekend. My brother-in-law and my sister and I had gone up for the day, I was not working that weekend. I met up with them in the chair line, and my brother-in-law was talking to a young woman, she looked a little older than me, but not much. Short hair and just a cute as could be, I joined them in the line. Stew introduced me, and I'm embarrassed to say that I had no idea who she was, this being the year before the Olympics. Stew and my sister Cora got on the lift, and this young lady and I sat in the chair behind them, going up the mountain.

I had on my instructor's parka, and she commented on it. I must have preened a bit, and agreed that yeah, I must be pretty darn good. Something like that, I don't remember exactly, but I still cringe to think how the conversation must have gone. Somehow, I suggested that we'd ski down together, I'd follow her and give her some pointers.

Sigh. What I do remember is that we got off at the top of the lift, and started down, me a bit behind her. It took about 100 yards before I realized I couldn't keep up with her. She was on the fall line, and something bad would happen if I tried to ski as fast as she was going. As she pulled away, I veered off, going over to another chair. I skied the rest of the day in fear that I'd run into her again.

On the drive back to Bend, I told Stew and Cora what I'd said to her, offering her lessons. They looked at me like I'd grown two heads, and Stew said something about hubris.
Posted by Should Fish More at 10:06 AM 3 comments: