Way ahead of her time with this book..... 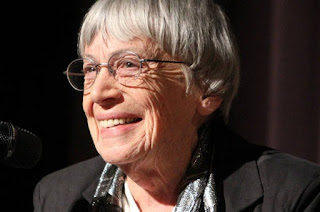 I had the pleasure of hearing her speak many decades ago, in '71 I think. She took questions from the audience after, and I asked her why, in her book "Left Hand of Darkness" she had one of the main characters killed. She smiled indulgently at the 23 year old and said "It's just what happened."

I've re-read the book recently, and it's amazing just how current it is, and how relevant it is to conversations we're having about gender and sexuality. There has not been another book that even approached the subject with the acumen that she brought to her craft. 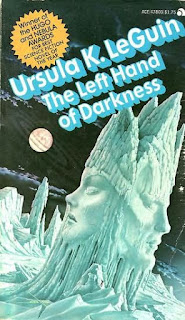 So, in what apparentlt is an attempt attract fewer viewers, I've been posting about uninteresting things. To continue that vein, I''ve been start to pickle things........not sure why, but enjoying the exercise.

I've done asparagus, garlic, thai chili's, and now green beans and....gasp...hard boiled eggs. The latest batch, two jars, has been in the fridge for two days, and will probably be there 'till the weekend.
Two jars, both have eggs, though only one is visible. I'm heading to Seattle soon, and I know there are quail eggs in the Asian markets there, that's what I need. 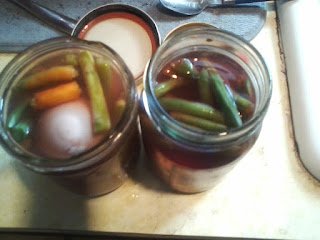 It's been unseasonable recently, was up to mid 40's yesterday. This morning, it's back to normal. 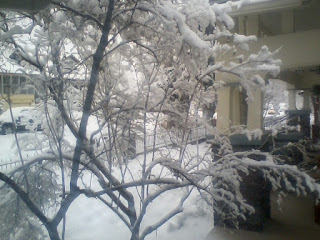 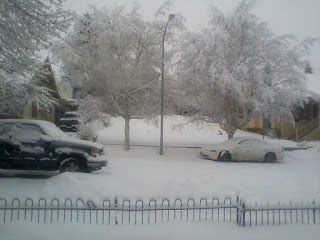 Ah well, only another 3-4 months of snow.

A Fish Bone, and getting current with laryngoscope technology.

Yesterday my good friend Ed came over for dinner, and brought with him a couple of trout from a nearby lake.  Both in prime shape, cold water, well fed, looked great

For breakfast I thought one of these would be just the thing. Washed, dried, floured and seasoned, fried till skin crisp on both sides, potatoes and even a scramble egg.

When I finish frying the trout, and these were typical of what I have, 10" minus head and tail, just right 'pan size', I scoop them out on the plate, and lift the tail end of the spine, helping with the fork as I go, seperating the fillet frome the skeleton. Turn and repeat. Usually, this gets all, or at worst the vast majority of the bones.

Yes, I'm building up to something.

With what was I think the last bite of trout, potatoes and egg, I felt something lodge in my throat. I coughed many times, drank a bunch of water, still the same. Very quickly, though I was in no danger of immediate death, I knew somebody would have to get this little sucker out of there. 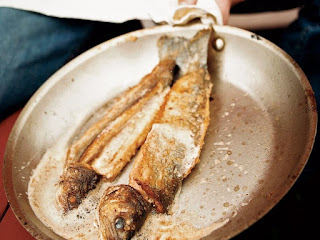 ER we went, stopped by the urgent care place, but as soon as they heard the words 'bone in throat' they wanted to call 911. I talked them into just hanging out, etc.

In the ER, I got to see a ENT guy a hell of a lot quicker than I would have thought: it was 11:30 and lunch time, so I was amazed when this guy showed up in 10 minutes. I should emphasize I was in no distress, breathing or otherwise.

Anyway, he had the offending little bone out in under 10 minutes.

Here's the ones I used to use back in the Plistoscene Era, to entubate people: 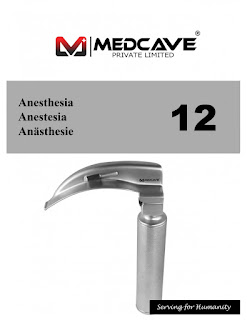 Here's the ones they have now.  Back then we had to peer down the curved blade, distinguish where the esophogus diverted from the trachea, get the tube down the right opening, etc.

Now, they have these with video screens, built into the scope, with a light on the end of the blade. 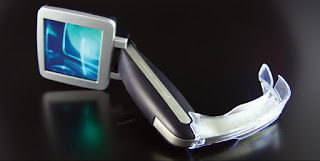 Jesus Judas Priest. The things I could have done with this.....the times we had to take someone to surgery because I couldn't see the vocal cords because of trauma, edema...I could have had an endtrach tube in in seconds.

Despite wolfing down breakfast and swallowing a small fish bone, it was a good day. I got a glimpse at the future.

Another statue maybe needs to be taken down

This is from 'Fly Fishing in Yellowstone Park', a great blog that frequently has nothing to do with fishing. 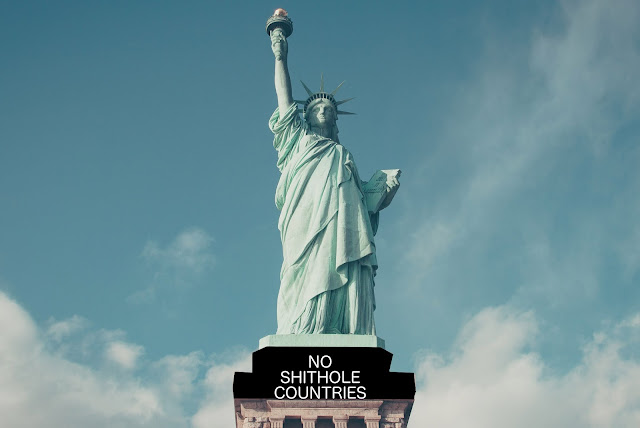 Liberty Enlightening The World is the name of the statue. It was given to the United States by the people of France, and was dedicated on October 28, 1886. .. Emma Lazarus (July 22, 1849 – November 19, 1887) was an American Poet. Lazarus was born into a large Jewish family, the fourth of seven children of Moses Lazarus and Esther Nathan... Inscribed on a plaque is the final stanza of her sonnet entitled the 'NEW COLOSSUS.'.. The sonnet was written in 1883 and donated to an auction, conducted by the "Art Loan Fund Exhibition in Aid of the Bartholdi Pedestal Fund for the Statue of Liberty" in order to raise funds to build the pedestal.

NEW COLOSSUS
Not like the brazen giant of Greek fame,
With conquering limbs astride from land to land;
Here at our sea-washed, sunset gates shall stand
A mighty woman with a torch, whose flame
Is the imprisoned lightning, and her name
Mother of Exiles. From her beacon-hand
Glows world-wide welcome; her mild eyes command
The air-bridged harbor that twin cities frame.
“Keep, ancient lands, your storied pomp!” cries she
With silent lips. “Give me your tired, your poor,
Your huddled masses yearning to breathe free,
The wretched refuse of your teeming shore.
Send these, the homeless, tempest-tossed to me,
I lift my lamp beside the golden door!”

Someone who I shouldn't have outlived.

And for good reason. Norway is a country which, like other Scandinavian social democracies, has a stronger middle class, a higher life expectancy and a more vibrant democracy than we do. The government there provides universal and virtually free health care, free college tuition, and strong pensions. In other words, it has a governmental system that tries to represent all people, not just billionaires. Last year, Norway soared to the top slot in the World Happiness Report. The U.S. was 14th."

So, so the rest of you don't have to, I looked online, which gotta be the truth, what Norwegians might want to make the move to trumpland. Turns out there is a white supremacist group, Vigrid, which combines nut-ism from the KKK with Norse mythology, about maybe 500 of them, and they just might be willing to live in say, Mississippi, Alabama, etc. They'll be white, you can be sure, bet they'll be GOP and NRA supporters.
So go gettem' trump. Your people, just waiting across the pond.

Meanwhile, I'm figuring out finances for the Norse countries......
Posted by Should Fish More at 5:03 PM 11 comments:

My friend Ed went fishing yesterday at 'notellum' lake and when he came over for dinner brought me two trout. I had one for breakfast this morning, it was excellent. Both rainbows caught through the ice, both in prime, firm shape. Breakfast: 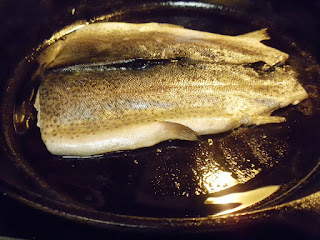 The other, about twice the size at 18 or so inches, was a female, or 'hen' in the parlance of trout gender. It would have spawned in 3 or 4 months, and had two egg skeins about 4" long each.

I decided to try to make trout 'caviar', seems a simple process. It's underway, and going to sit in the fridge curing for a couple days. I'll let you know how it turns out. 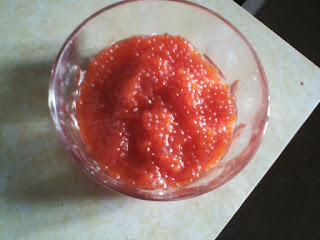 I'm not sure. Compare and Contrast, as I asked students to do for decades?  Predict? Watch every historian flee the room? Dunno.

I do know there are people more knowledgeable than I to judge the difference and delta betwixt the years....I was not here for 9 months of that year, and only aware for 2 months. I was in Vietnam most of that time, and in Bethesda Medical Center the rest.

I do wonder at the similarities I see in photographs, I read in the papers (I guess media we should say now), the fact the same issues are being discussed/argued/and vilified now, 50 years later. 50 years. 50 fucking years. Jesus fucking judas priest, can't believe it. Just over a year from that date, 51 years ago, I was in a motel room in Portland for a conference watching the moon landing.

All this other shit was out there, the race issues, the war, but here.....we were landing on the fucking moon!!! Obviously we can't keep this other shit up when we're going out to space, humanity heading to the unknown?!!! Right??

Turns out not, we as a group are far more trivial, tribal, whatever than that. We can build the technology to go perhaps to other planets and maybe eventually to other solar systems, but we cannot overcome the prejudice to keep us from our own characteristics.....that of sexuality, gender, and other. We limit ourselves, willing and with the giving up of our soul.

Some pictures of then and now: 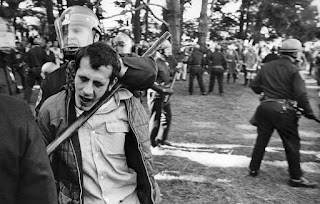 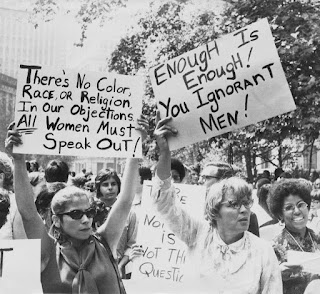 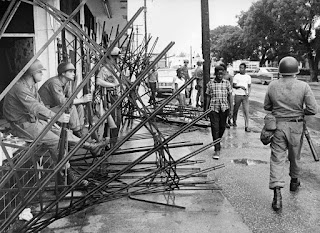 Anything look familiar so far? 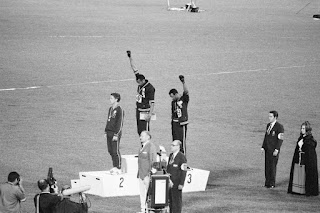 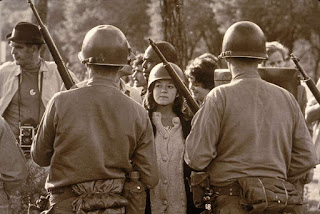 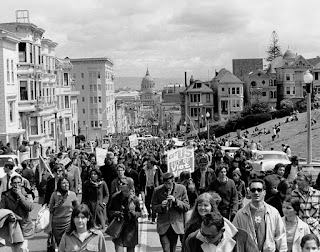 "Enough is enough, you ignorant men...."  Geez, that sound familiar?? I was only 50 years ago this sign was hand printed. 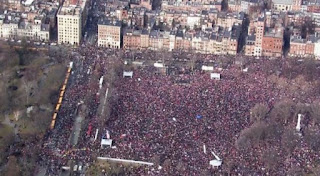 Oh yeah, trump always insisted his inauguration group was 'the largest in history'.....well, this one exceeded it by a half million, and it was in protest of him.

Currently -12, might hit 30 below tonight. Apparently the the uppermidwest this is disaster, catastrophe, etc.  Here, it's another night in early January.

Cheers to all, oh!  And Happy New Year.