The last week here has seen warm temps (65) during the day that pleases and confuses us.....it's fine, but no good will come of it.

So on Friday the weather took a turn for the normal.....getting cooler, then yesterday it started snowing around 6pm, though not cold. By morning there was an inch or so of wet snow on the yard and truck, but it was gone by noon and the sun came out once. 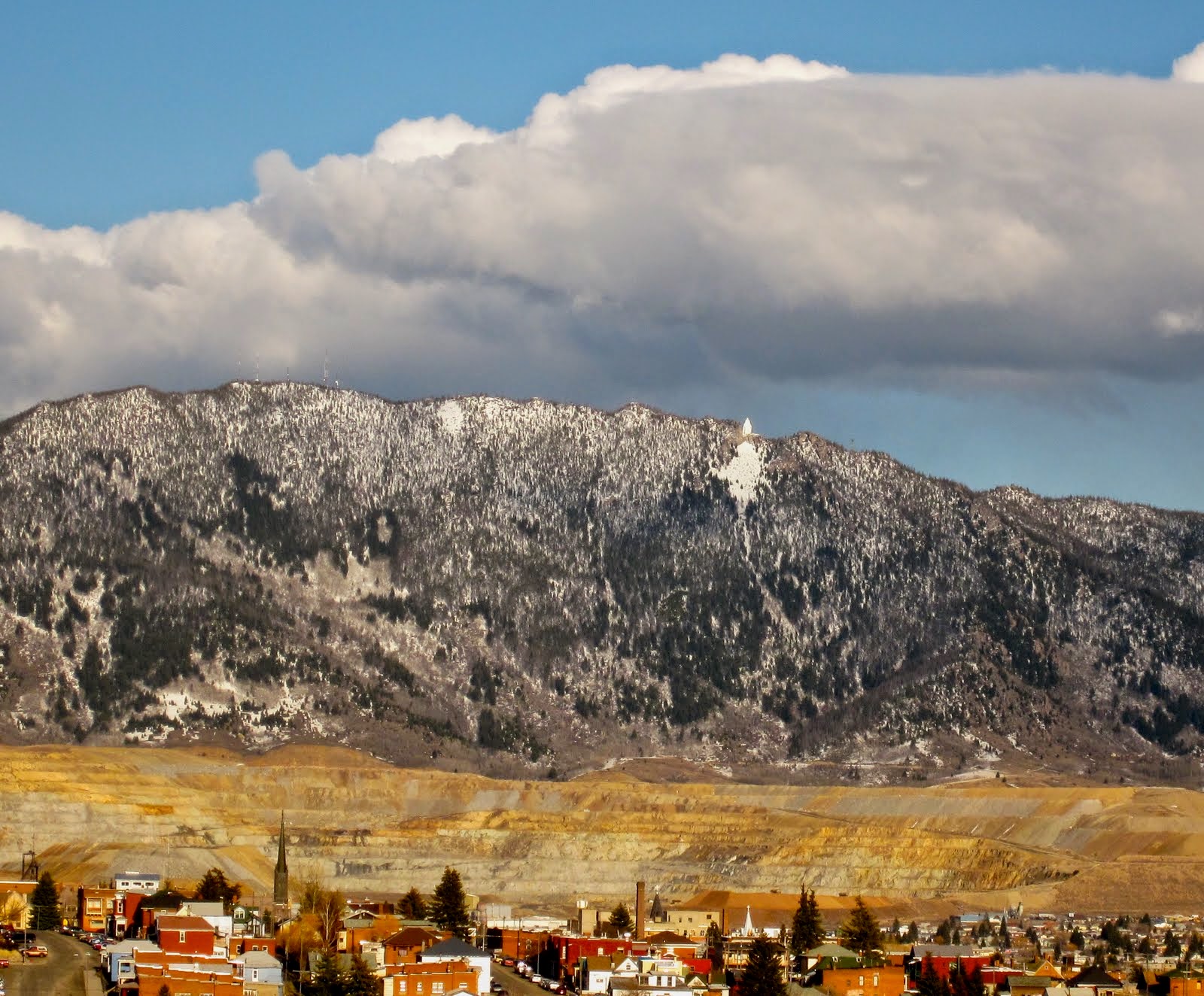 The bulbs that Emily planted in the front 5 years ago are still coming up, this spring a month early, and on the way uptown for breakfast I had to stop for someone unnecessarily plowing: 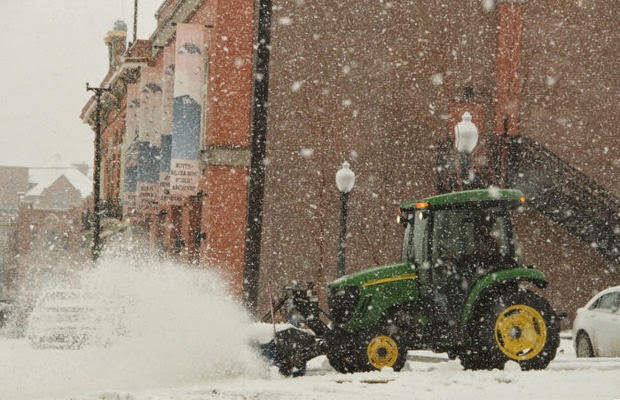 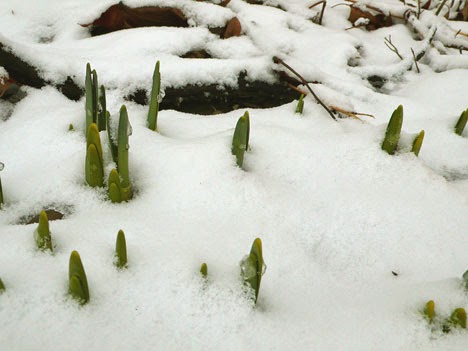 But, it's supposed to be 70 by Tuesday, and all the snow seen above is melted. This is typical of Spring here, but this year early in terms of temp. Our snow pack, so far, is good, and we should escape fire issues locally this summer.

The robins are here, the grass is greening up nicely, and real Spring should happen in a week or so. The first day of 70f.......and rather early at that.

Early in the week errata

Unalaska, a town out near Dutch Harbor, has a until recently little-known author(ess) in the Sargent in charge of writing the activities of the police department.....a bit of her work:


Domestic Disturbance
A grown man asked an officer to tell his grown dipsomaniac son to go beddy-bye. The officer helped the drunk to bed, but declined the request to feed the family cat on the way out.

Or this one, about a routine animal complaint:

Public Safety (01:46 hrs, 11/9/11) — Officer watched three extremely intoxicated and giggling louts urinate on the road, on themselves, on one another, and on a taxi in front of the Harbor View Bar. The wet-legged men abashedly explained to the admonishing officer they had been kicked out of the bar before having an opportunity to use the restroom there.

Domestic Disturbance (00:26 hrs, 12/30/11) — Drunken boarding house tenant reported that his equally drunken nemesis had taken his cell phone, and he wanted it back. Officers told both sots they would go to jail if they continued behaving toward one another in such a fashion.

We should all have such LEO's, eh? Oh, and thanks to the esteemed, recently-married Mr. Gray from a remote outpost in Wales for the tip some months ago about the site.

Now, gentle readers, tell me this:  Why, in the name of all that's good, do gun sales in the US increase dramatically after such things as school massacres, mass shootings, etc?  Why do we believe crime is on the increase when it's shown to be at a 20 year low?  Why, after proclamations that the racial issues in our country are all but past, does it seem like they are just surfacing?

This concern's the 'Game of Thrones' serial television show. Want to know who ends up on the throne, ruling the kingdom? 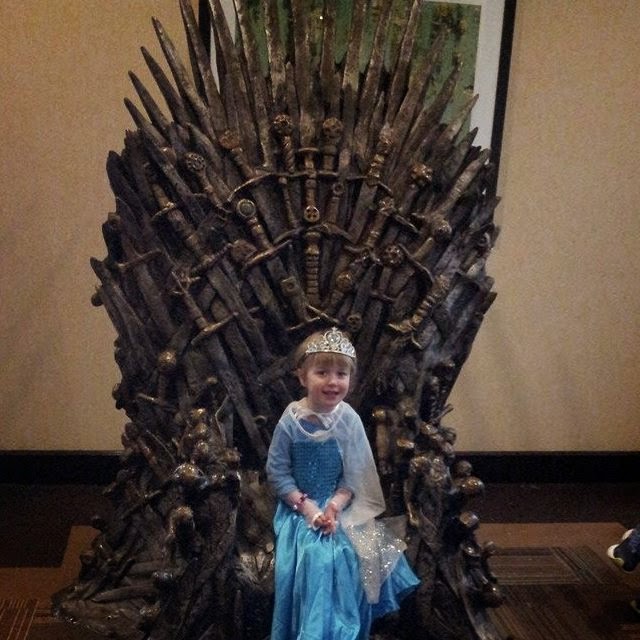 The eldest daughter and son-in-law took her for a day or so to a convention they are part of, and along with George R.R. Martin, the author of the books, was the throne from the show.

Sorry if I spoiled the show for anyone, but I think Fiona will rule well, and keep them busy during the long winter.
Posted by Should Fish More at 6:22 PM 9 comments:

A favorite place and meal

A prelude to the next travel story: I spent 3 weeks some years ago in Dusseldorf, actually in Neuss, a small community across the Rhine, consulting with a group of primary investigators on a project for a big pharma. 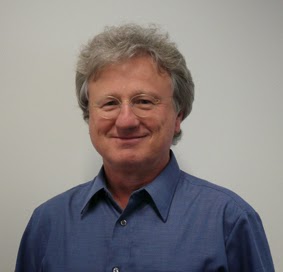 ...took me to his favorite place, night after night. 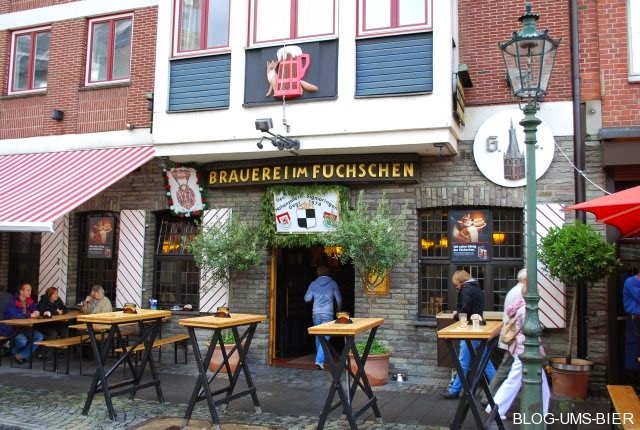 We went in the early evenings, it was crowded every time. 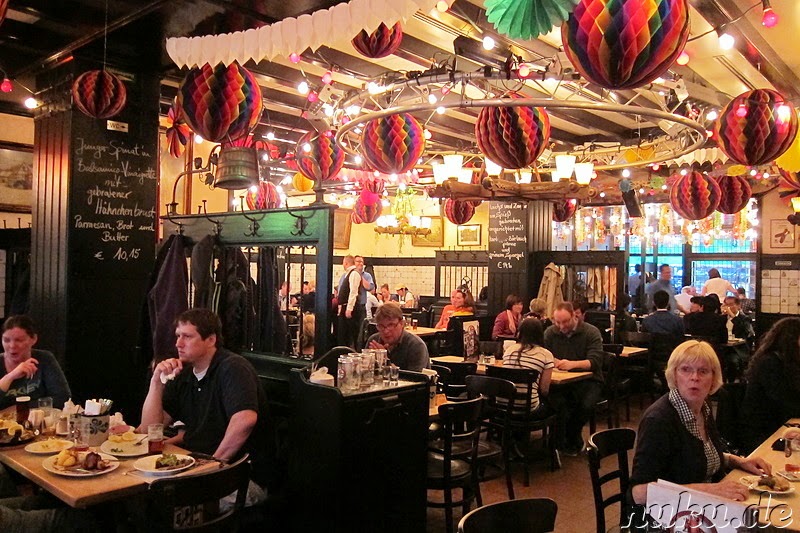 They served one beer, and one beer only. They brewed it on the premise... 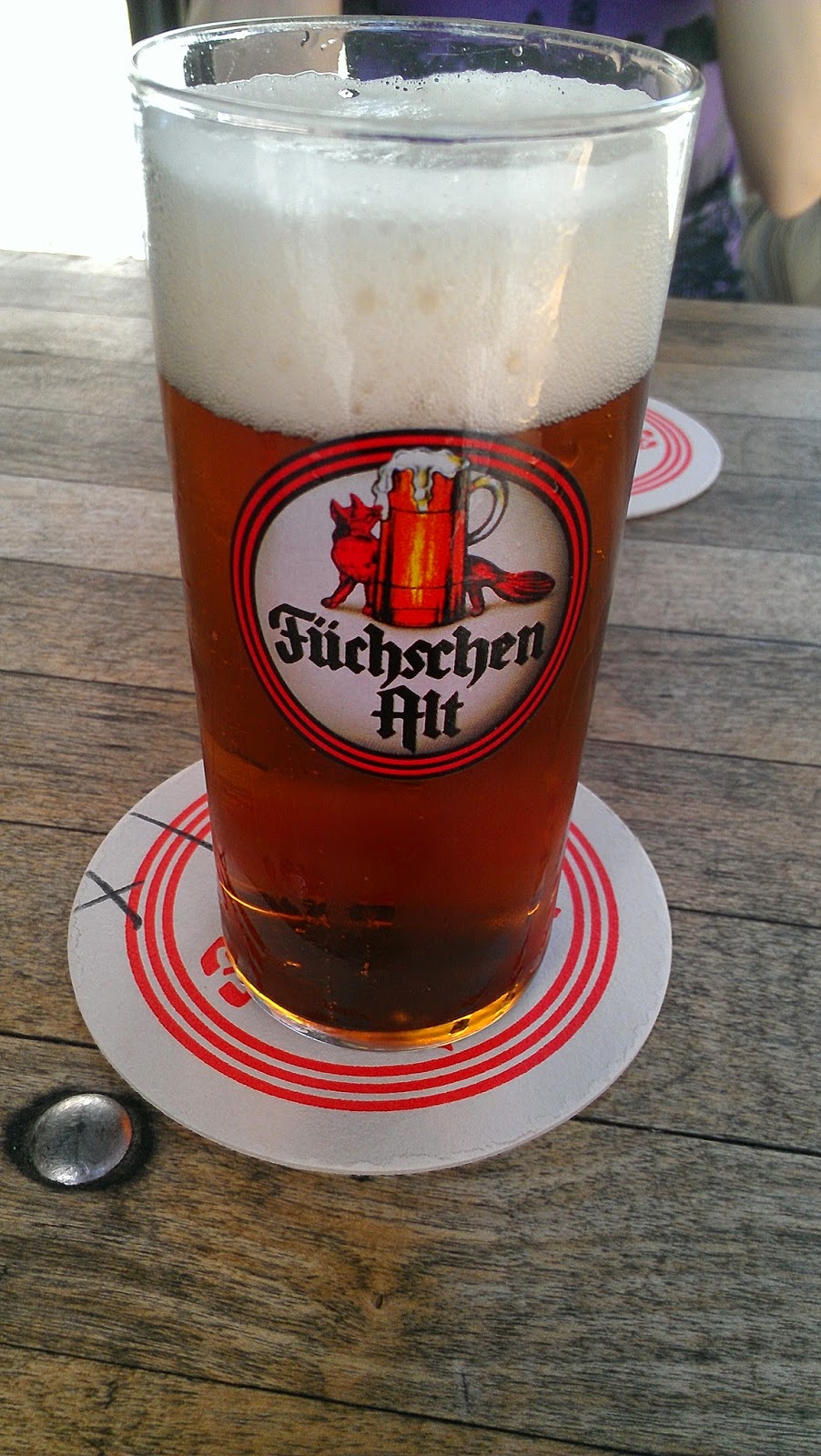 It was excellent. See the marks on the coaster? the X and I? That's how they keep track for billing purposes at the end of the evening. Sometimes the marks would encircle the coaster.......

There was a ample menu, but I only ever, in the multiple visits, had one thing. The Schweinhaxe: 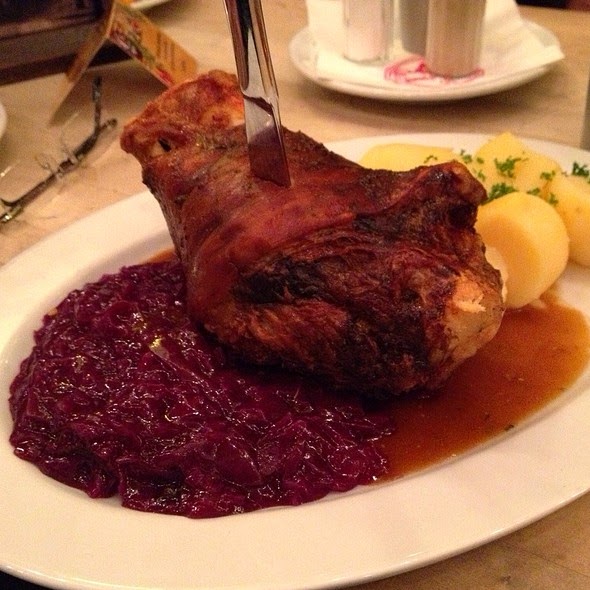 A parboiled then grilled pig shank, served on a bed of kraut with potatoes on the side. It was heaven.

I spent the last 15 years of my working life as a clinical consultant, for several companies.  An average year would see me flying 150,000 to 180,000 miles. One can't help but accumulate a few stories along the way. So on occasional Friday's I'll post one. Today's is: 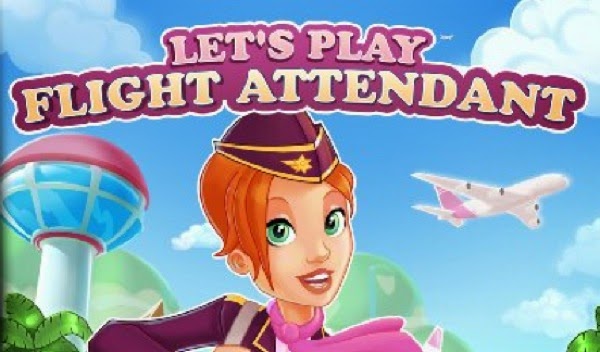 One year, a week or so before Christmas, I was trying to wrap up a couple projects before the holidays began. I had spent a day in Medford Oregon, and was taking an early evening flight to Phoenix. American Airlines had a regional carrier that had direct flights, a duration around 2 hours.

I boarded the 50 seat CRJ, nodded to the late middle age blondish flight attendant and took my seat. The passengers were a mix of the usual blue-shirted business travelers and a smattering of the holiday crowd, a couple families.

Normally, when one flies as much as I was doing, the routine things like putting away bags, finding your seat, the comments over the speaker system about moving out of the isle and safety instructions, fly over your head without noticing. As I settled in my seat I vaguely heard the flight attendant start the pre-flight safety talk. Then she stopped for a moment and started again. Then she stopped and started again. This I noticed.

I looked down the isle and saw her, the lone attendant, standing at the front with the microphone in hand. She was rummaging through a overhead bin at the front where the attendants store stuff, clearly looking for something. Then she turned toward us and started the talk again, stopped again after a few sentences. Then, she said "Oh well." and put the microphone back on the wall.

This I noticed. "Oh well"? I seemed clear that she didn't know the short talk that most attendants can probably recite in their sleep. "Huh." I thought. I noticed a couple other blue shirts looking puzzled also.

The small jet took off normally and climbed to cruising altitude. I saw the attendant working her way down the isle with a pad and paper. She got to my row and asked what we wanted to drink and if we wanted pretzels or whatever snack they were serving. Iced tea was usually my choice. A bit later I saw her with a tray working her way back again, serving the drinks. It did seem to be taking a bit longer than usual.

At my isle she handed my seatmate something, and me a diet coke. Both of us said "Um, this isn't what I wanted." She looked at us, gave us a rather helpless smile and said "Oh well", and moved on. 'Oh well'? My seatmate and I frowned at each other. It was clear we had wandered into a unusual flight experience.

The rest of the flight continued in the same vein. When she would attempt something that most flight attendants do without being noticed, like make announcements, she would verbally stumble, stop, and say 'Oh well'.

Soon, an undercurrent started going around the cabin. I could hear people talking in low voices. 'This isn't a real flight attendant'. This was bad enough, but then someone wondered 'Are those real pilots up front?'. I heard this, and told them that the flight had taken off fine, was cruising normally, so it was just the flight attendant.  Let's not wish for bad luck.

Our approach to Sky Harbor airport in Phoenix was normal, except that as we were on final approach, less than a mile from touchdown, this woman was still walking around the cabin. As we touched down she was in the isle and almost fell. Someone said "For godssake, sit down!"  Her response was "I'm fine, it's all fine." with the same odd smile.

As I was de-boarding she was standing near the door, smiling at the departing passengers. I said "You're not a real flight attendant, are you?" She looked at me, her smile fading. "Was it that bad?" I nodded. "Yep."

Next Travel Story: My luggage takes a vacation in Italy.
Posted by Should Fish More at 8:56 AM 10 comments: