My house this morning 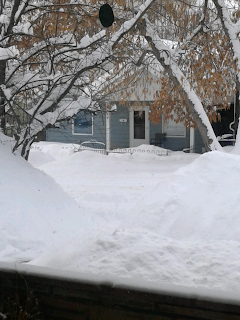 Happily, I'm not there until Friday

Butte this morning.....15 inches new over a 2+ foot base. Another foot expected between now and Friday. Oh, and it's 1 degree above, so it's not too cold. 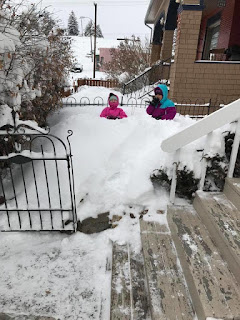 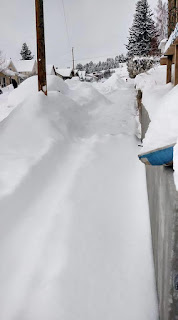 Not sure how much longer I'll blog, kind of depends on lots of factors. So dunno. Anyway, thought I'd do a succession, a contrast, something about presidents. 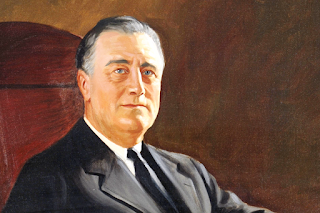 The creationist of the New Deal, the idea of social equality, of rights of workers, and put through more legislation in the first 3 months of his presidency than any before or after. Also went overboard, in an understanding way to a liberal like me. Stacking the Supreme Court, overreach in others, rightly understood that the population of the US did not understand history or politics enough to know we had to give aid to Great Britain, whether or not they could repay. 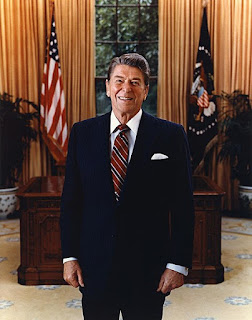 An actor, Governor of California, and a more likable person you'd ever want to meet. Until you met him. Did his best to reverse everything FDR had done in terms of social legislation, articulated conservative values in terms that people identified with, and was quite popular. Also, was probably affected by dementia for most of his last term in office. And arguably could deliver a speech like none other.

And, for me, one of the most complex and puzzling. Barack Obama. 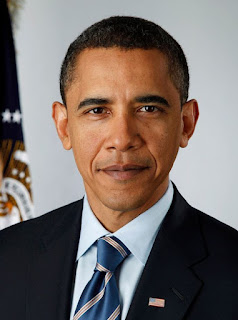 Do you remember that November of 2008? The joy we felt? For me, at a rather advanced age, it was reminiscent of when JFK was elected in 1960: a new beginning, a huge jump forward, the possibility our dreams could really happen. A articulate, poised, intelligent President. Coming on the heels of W, this was not a high bar, but Barack leaped it with feet to spare. Oh...and he was a black man. America had finally done it, broke that ceiling. Race, maybe, we thought, or at least some of us, was on the right track to understanding and someday a real togetherness. We were so naive.

Then, we found that he did not do exactly want what we, dreamers, leftists etc, wanted. He was a moderate democrat. He made decisions about the military, security, I did not agree with. But his charm, his intelligence, won me over, time after time. He was an honest, introspective man.

Now we have......well you know what we have. One of my failures, as I look back 73 years, is a failure to recognize the differences between appearances and reality. I was out of touch with those  values unlike mine, and I thought we were a voice of america.

I do not know what the future will hold.

What do you think?

Tom Cochrun's comment below is a much better analysis then mine above. It shows that he is the award-winning journalist, and I would be better off interpreting pulmonary and cardiac tests.

Winter, during my absence, has settled upon Butte, as it should well have. My neighbor reports I have around 3' of snow in the yard, up to the top of the fence, as it should be. Night before last the low was -27, That's without wind chill. Chicago mad the national news with -20, in Butte it just make the weather page. However....The Berkeley Pit froze over, good for the errant bird that want's to land on the water. It has a Ph of 1.8, so kind of acidic. Nonetheless, it froze over. 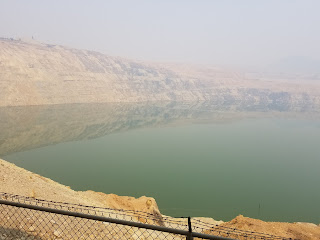 In the summer smoke from forest fires 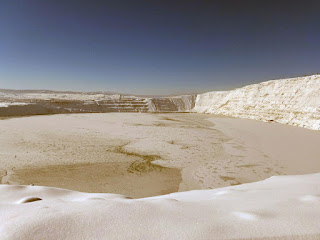 After a couple days of below zero

First, a picture of The Adorable One getting an award at her school assembly. They pick a couple students from each grade for some achievement. 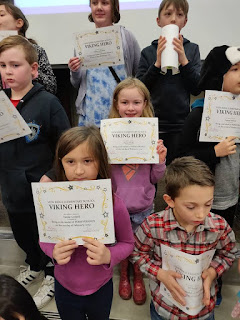 Next, it appears I brought some Butte-ish weather with me. 9" of snow has pretty much paralyzed the city and surrounding environs. What's more, the day before the weather hit, my dependable truck turned mulish and refused to run, respond to threats. It's still in the Safeway parking lot, covered with snow. No repair shops or towing services open. 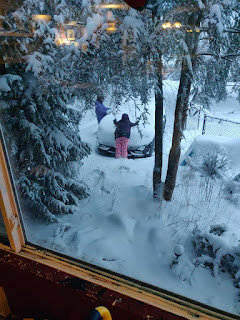 Once Upon a Time

We had a President who was a human being. He had faults, he was human. He was not infallible.

He came from a rich family.

He was a WW2 hero. He saved his crews lives, and fought against the enemy with valor. He could have gotten out of serving, his father was more than willing to make sure he could defer. He lost a brother in the same war.

When he became President he brought the country together, though, as anyone in power, he had detractors. Some because of his religion. He inspired a whole generation to public service and personal sacrifice, not hatred of the 'other'.

He had the wisdom to surround himself with 'the best and the brightest', who were free to voice their disagreements with him, and often did. He had the wisdom to pick the course advised that best served his country, not himself. He did not limit his working hours during the day to 11am to 4pm. He did not watch television 16 hours a day. He did not reverse himself daily and deny that things he said, even though they were recorded, were true. He had, like most presidents, a bitchy media. He never called them enemies of the state.

He cared about the people of the whole country, not just the ones that worshiped him. He was at times introspective, and formulated policy with advise and consent.

He was killed in office. 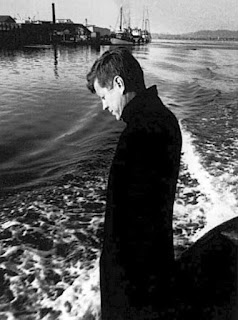