The Principal, and the child who won't learn

Look  at his posture, the  arms  crossed  in  defense, the  embarassed/guilty  look,  and  Ms. Merkel, looking  disgusted  and unbelieving.  She  is an example  of how  the world  views  us now, through the lens  of  donald trump. 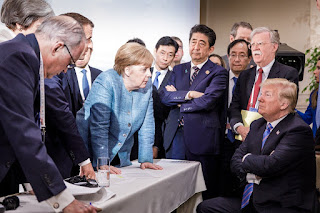 We have no one  to blame but  ourselves.   For  the  genuine trump supporters  that  have  stuck  with him  through  his litany  of some  genuine  crimes,  and total  lack  of  morality, there  is  nothing to say. Hopefully, you'll  have  to soon  crawl  back  under  your rocks  and mutter to each other.

To those  who've (big edit here which  clearly  went awry  again)  didn't  supported him,  you  need to redouble  your  efforts, and  elect  representatives  who  won't  support him,
Posted by Should Fish More at 1:48 PM