If Ever There was Reason for it: This is It 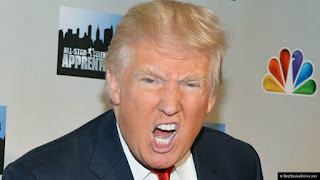 And no, I'm not necessarily recommending the illlegal removal of some one from office, I'm just not clear that 'Buffoon' and 'Idiot' and 'Deliberate Asshole' fit in the catagory. Of those who can't be recommended for such a removal.

Trump Explains Why He Rejects Daily Intelligence Briefings: “I’m, Like, a Smart Person”

Ok.
Well, what about:

Trump Says “Nobody Really Knows” if Climate Change is Real

WASHINGTON — President-elect Donald J. Trump said in an interview broadcast on Sunday that he did not believe American intelligence assessments that Russia had intervened to help his candidacy, casting blame for the reports on Democrats, who he said were embarrassed about losing to him.
“I think it’s ridiculous. I think it’s just another excuse,” Mr. Trump said in the interview, on “Fox News Sunday.” “I don’t believe it.”
He also indicated that as president, he would not take the daily intelligence briefing that President Obama and his predecessors have received. Mr. Trump, who has received the briefing sparingly as president-elect, said that it was often repetitive and that he would take it “when I need it.” He said his vice president, Mike Pence, would receive the daily briefing.
(me again)
Ladies and Gentlemen, may I present you with your next President of the United States.  Positions occupied by Washington, Lincoln, FDR, JFK, and now the likes of this.....
Congratulations, you 59 some millions of voters that selected him. You got what you choose.
"Oh geez, this isn't what we thought would happen." you may well be saying in the months and years to come" Yeah, well more of that process of 'thought' should have factored, eh? Your town,neighborhood, our world, is more complex and less unified than you think, probably.
I wish I could say I wish you the best, but I don't. You have put a racist demogogue, a man who's interest in what's best for the country probably third or fourth in his list, in charge. You got him, live with him.
As a gauge of what he's telling you that is true, check in 6 months, see how things are. Witness the chaos that is going to happen.
We have an actuall clown as president of our county. Lets see how we like it.
Mike
Posted by Should Fish More at 4:44 PM