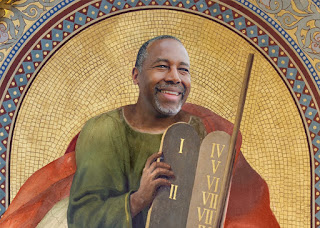 In a talk to his new employees at HUD, Carson outdid himself. From the San Francisco Chron:

It's been less than a week since Ben Carson was sworn in as the secretary of the Department of Housing and Urban Development, but he's already making headlines.
Speaking to HUD employees Monday, Carson referred to slaves as immigrants who dreamed of better lives for their children in America.
"That's what America is about, a land of dreams and opportunity," Carson said. "There were other immigrants who came here in the bottom of slave ships, worked even longer, even harder for less. But they too had a dream that one day their sons, daughters, grandsons, granddaughters, great-grandsons, great-granddaughters, might pursue prosperity and happiness in this land."
Slaves were really immigrants. Who would have thought......

Posted by Should Fish More at 2:28 PM